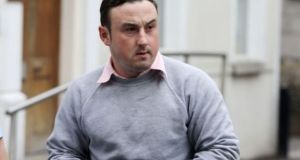 The man accused of murdering Detective Garda Adrian Donohoe has described a prosecution witness as a “lying psychopath” and denied any involvement in the robbery that led to the garda being shot dead.

He described Mr Cahill, who has denied any involvement in the assault, as a “lying psychopath” and swore on his son’s life that Mr Cahill was one of a group of men who broke into his apartment and assaulted him.

Mr Brady further denied he ever admitted to Mr Cahill that he had shot a garda in Ireland. He described the claim as “ridiculous” and added that he never liked Mr Cahill and, after the alleged assault, was terrified of him.

He told his defence counsel Michael O’Higgins SC that he was at a diesel laundering yard on Concession Road in Co Armagh at the time Det Gda Donohoe was shot dead at a credit union in Lordship, Co Louth.

Aaron Brady (29) from New Road, Crossmaglen, Co Armagh has pleaded not guilty to the capital murder of Det Garda Donohoe who was then a member of An Garda Síochána on active duty on January 25th, 2013 at Lordship Credit Union, Bellurgan, Co Louth. He has also pleaded not guilty to a charge of robbing approximately €7,000 in cash and assorted cheques on the same date and at the same location.

The defendant took the stand on Monday morning and gave details of his background, upbringing and time spent as an apprentice electrician and later as an advertising salesman.

At the time of the shooting, around 9.30pm on January 25th 2013, Mr Brady said he was at a yard on Concession Road near Cullaville loading a trailer with cubes of diesel laundering waste.

He accepted he lied to gardaí about his movements when questioned the day after the shooting and when he gave a statement ten days later. He said he lied because he didn’t want to alert gardaí to the fact he was involved in diesel laundering. He added: “I shouldn’t have lied but I had nothing to do with the murder of Det Gda Adrian Donohoe.”

Describing his background he said his family moved to Nottingham in England when he was about one year old. His father, Tony Brady, worked as a milkman while studying physiotherapy. The family returned to Ireland to live in Crossmaglen in 2002 where his father got a job as a physio with a number of GAA teams including Crossmaglen Rangers. The accused left school aged 16 having done his GCSEs. It was in school that he met another man who has been named during the trial as a Suspect A for the robbery. He described this man as his best friend at that time but said they fell out in 2014 and haven’t spoken since.

After leaving school the accused became an apprentice electrician but did not complete the course. He also worked for a time as an advertising salesman for his father. He said he has always had a job and was never on social welfare for more than a month.

In September 2012 he met Jessica King and started a “serious relationship” with her. He was, at the time, charged with the unlawful taking of a vehicle and was under curfew to remain at his parent’s home from 9pm to 7am every night. By January 2013 his life was, he said, “good, happy, I was in a good relationship.”

He was at that time also involved in fuel laundering. He explained that a yard owned by his then best friend’s mother was being rented by another friend who used it for loading cubes of waste generated during the fuel laundering process onto trucks. The cubes would then be dumped. Mr Brady said he would get up to €300 for loading the truck.

In January he was mostly staying at his friend’s house in Bellurgan, Co Louth but he would sometimes stay with his parents on New Road and he was also renting a house with friends on Lough Road in south Armagh. He described this as a “party house” where he would go with Jessica King and his friends after a night out.

Mr O’Higgins brought him to the night of January 22nd and into the early hours of January 23rd when the prosecution alleges a Volkswagen Passat was stolen from outside a house in Clogherhead, Co Louth. It is alleged the same Volkswagen was used in the robbery and later found burned out at Cumson’s Road in Armagh. Mr Brady said he had “no involvement in stealing that car in Clogherhead. “Unequivocally, I had nothing to do with stealing that car.”

Mr O’Higgins said the prosecution alleges that Mr Brady was a passenger in Suspect A’s car that was seen on CCTV passing Lordship Credit Union earlier on the day of the robbery. Mr Brady accepted that he was the passenger but insisted there was “nothing sinister” in what they were doing. He denied they were “casing the joint,” adding: “Absolutely not.”

After that he said he went to Suspect A’s house where they played Fifa and a darts game on their phones. After eating a chicken curry they went to pick up another friend, Suspect B, and went to a police station in Crossmaglen so that Suspect B could sign on, which he did at 7.20pm. He then left Suspect B home and went to the rented house at Lough Road before going to the diesel yard on Concession Road. He said he spent about one hour and thirty minutes loading the trailer before Suspect A again picked him up and dropped him to Jessica King’s house in nearby Cullaville at about 11pm. The accused said he remained there until about 3am when Suspect A again picked him up and they returned to Suspect A’s house. They slept that night in the same bed, he said, as his friend’s mother was particular about using the spare room.

The accused said a number of calls between himself and various named individuals on the evening leading up to the robbery were about fuel laundering. He also pointed out that he texted Jessica King to say he would be loading a trailer that night for about two hours.

The accused said he was not at Lordship Credit Union that night and he had never been to Cumson’s Lane where the Volkswagen Passat used in the robbery was found burned out. He denied that a series of phone calls he made to various people the following day had anything to do with what had happened at the credit union and said his phone’s inactivity before and after the robbery was of no significance.

He recalled being stopped by Sgt John Moroney on the afternoon after the robbery and accepted that he lied when asked to account for his movements. He added: “Not for one second did I think Sgt Moroney or the guards would be serious about me being involved in shooting a garda.”

He said that at that time he would never have told a garda he was involved in diesel laundering and he was also concerned because Sgt Moroney was involved in prosecuting him on matters then before the circuit court for which he was under curfew. He admitted he asked Jessica King to lie for him about his movements and accepted he shouldn’t have done that.

He further accepted he lied again to gardaí ten days later when he gave a statement saying that he had gone to the diesel laundering yard but only stayed there for about 15 minutes because he couldn’t get the forklift started. He said he told this lie because he didn’t want to “implicate” himself in diesel laundering and he was worried about how it would look in his community. His dad, he said, was chairman of Crossmaglen Rangers and “it wouldn’t look good, his son being involved in dumping these diesel cubes.”

Mr Brady said he left Ireland for America in April 2013, about two months after the robbery. He had been featured on the front of the Sunday World which used a pixelated picture of him. His mother saw it and was upset, he said, and he fell into depression. He said he lost his job after the gardaí “blackened my name” and he couldn’t get another job. During one court appearance he said a garda approached him and said: “Brady, you’re not welcome here you bastard.”

“Life was horrible,” he said and his relationship with Ms King had become strained. He added: “I wanted to get away from being blamed and accused. People saying there’s Brady who murdered Detective Garda Adrian Donohoe.”

He first went to Boston to work for Suspect A but they had a falling out in 2014 when Mr Brady went missing for a few days when he was supposed to be working. He moved to New York where, he said, he had a great life. He was earning 65 dollars per hour and time and a half if he worked more than 40 hours in a week. Even though he was there on a 90-day tourist visa he said it was easy to find work with Irish construction firms.

Asked about Daniel Cahill, he said Mr Cahill was a bartender at the Coachman’s Pub in the Bronx, a bar Mr Brady would visit occasionally. Mr Cahill has told the trial that Aaron Brady told him on three occasions that he shot a garda.

On St Patrick’s Day 2015 Mr Brady said he did not join in the festivities but went to bed because he had to go to work early the next day. He awoke when he heard a bang and his door was kicked open. He saw Mr Cahill and at least two other men in his bedroom and, he said, Mr Cahill pinned him down on his bed and headbutted him. The assault, he said, went on for about ten minutes. He said Mr Cahill then demanded that Mr Brady call a friend to tell him to call over.

Mr Brady swore on his son’s life that Mr Cahill was the man who assaulted him in his apartment and added: “I never said to Daniel Cahill that I shot anybody or murdered anybody.”

His evidence will continue on Tuesday in front of Mr Justice Michael White and a jury of six men and seven women.