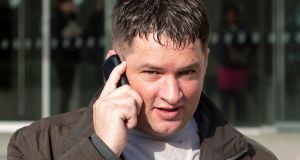 Mark Dolan, of Clonard Park, Ballybeg, Waterford, was told that his original six-month jail term for smashing a glass into a talented rugby player’s face was too lenient. Photograph: Collins Courts

The courts should not shy away from starting at five years’ imprisonment when it comes to sentencing individuals for “high-end” cases of assault causing harm, according to the Court of Appeal.

Mr Justice George Birmingham, president of the Court of Appeal, made the observation after three people jailed for three separate assaults in Waterford were found to have been given “unduly lenient” sentences.

In each case, the appeal court president said the maximum available sentence of five years’ imprisonment for section 3 assault (assault causing harm) should have been considered as a starting point, or headline sentence, before adjusting the sentence down to take account of the mitigating factors.

“Certainly, judges should not operate on the basis that a starting point of five years is not generally available and that it should only be considered . . . in exceptional circumstances.”

He observed that judges may be “too reluctant to consider” starting at five years’ imprisonment for section 3 assaults but it should not be “excluded” for “high-end” assaults. As the facts of the three cases before the court showed, some section 3 assaults “can be very serious indeed”.

Martina McGrath (27), with an address at Connolly Place, Waterford city, was given an extra two years in jail by the Court of Appeal on Thursday for stabbing a pregnant woman in broad daylight on the city’s Quays in June 2018. The Director of Public Prosecutions had appealed her original 18-month jail term on grounds it was “unduly lenient”.

Dale Brazil (25), with an address at Gracedieu, in Waterford city, was given an extra year in jail following an appeal by prosecutors for attacking a man with a metal bar, after threatening his mother at a dwelling where the assault occurred. His original two-year sentence was found to be too lenient.

Mark Dolan (32), of Clonard Park, Ballybeg, in Waterford, was told that his original six-month jail term for smashing a glass into a talented rugby player’s face was too lenient. But Dolan avoided being sent back to jail as he was said to have “completely turned his life around” in the meantime, as had been submitted by his barrister, Mairéad Deevy BL.

Conor O’Doherty BL, counsel for the Director of Public Prosecutions in each of the cases, submitted that the headline sentences selected in each case were “too low” and, thereafter, the ultimate sentences had to be seen as “unduly lenient”.

In each of the three cases before the Court of Appeal, Mr Justice Birmingham said consideration should have been given to headline sentences of five years’ imprisonment.

He said factors that would tend to aggravate section 3 assaults include the infliction of significant injuries, the use of a weapon, the involvement of two or more assailants as well as planning or premeditation.

In the case of Martina McGrath, a weapon was used, there were two assailants, very significant injuries were inflicted and the offence was committed by someone with a “significant prior record” which included directly relevant previous convictions for violent assault.

In the case of Dale Brazil, Mr Justice Birmingham said the attack on the injured party was pre-planned. It involved making an approach to the dwelling where the offence occurred, the use of weapons by two assailants, and the infliction of injuries which had a significant impact on the victim’s quality of life.

He said the assault by Mark Dolan in a Waterford nightclub involved extreme violence, the use of a weapon and the infliction of permanent scarring on the victim’s left cheek. At the time of the incident, he said the victim had been training with the Ireland U-19 rugby team but, because of the injuries sustained, he was unable to play or train for a period and lost his place with the squad.

Mr Justice Birmingham, who sat with Mr Justice John Edwards and Ms Justice Isobel Kennedy, said the appeals were not linked or connected in any way, but there was some merit in giving a single judgment on all three cases, “as that course of action may provide greater assistance in the context of future cases”.

He said the court was in “no doubt” that in each of the three cases, there was an error in identifying the starting or pre-mitigation headline figure and, in each case, the sentences that were actually imposed were “unduly lenient”.