Open verdict in inquest into Iranian author’s death in Mayo 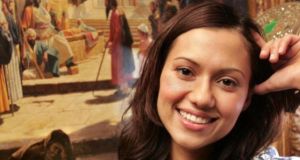 A coroner in Co Mayo has recorded an open verdict at an inquest into the death of an Iranian novelist at a rented apartment in Co Mayo.

Marsha Mehran (36), was found dead in Lecanvey, Co Mayo, last April after renting the apartment and immersing herself in writing a book, Coroner John O’Dwyer heard at a hearing in Castlebar.

The divorced author, whose works include Pomegranate Soup and Rosewater and Soda Bread, signed a lease on the property in January, telling told local estate agent Teresa Walsh she wanted the house in order to write.

She moved alone to the seaside village outside Westport to work on a book, The Margaret Thatcher School of Beauty, set in Buenos Aires during the Falklands War.

In a statement read to the inquest, Mrs Walsh said that on April 12th, Ms Mehran sent her a text. “Teresa, I have been vomiting blood for the past few weeks. I’ll get back to you in a few days to see what I am going to do about things. I am still pretty sick,” it read.

Mrs Walsh said she texted back to ask her tenant if she had been to a doctor and was there anything she could do for her. However, she got no reply.

After receiving no reply to numerous phone calls between April 12th and April 21nd, Mrs Walsh called to the apartment three times.

On the final occasion on April 30th, she banged on doors and windows. After failing to get a reply gained entry and found the writer face down on the floor, wearing only a woollen cardigan. She then called gardaí.

Mrs Walsh told the inquest that anytime she had called to the apartment previously, it was generally messy. “She appears to have thrown herself fully into writing,” she said.

Garda John Boyle and Garda Paul Lafferty from Westpost Garda station, who investigated the death, said there was no evidence of foul play.

Garda Russell Gibbons told of finding five saucepans of liquid around the property with “mould growing on top”. Samples of the liquid were sent to the Forensic Science Laboratory in Dublin for testing. A subsequent report provided by the laboratory indicated the odour, appearance and chemical analysis of indicated that the liquid was urine.

Dr Tamas Nemeth, consultant pathologist at Mayo General Hospital, who carried out a postmortem examination, said Ms Mehran had a recent history of vomiting blood and had a history of gastrointestinal symptoms.

Dr Nemeth said that although the overall findings suggest the cause of death was related to inflammatory bowel disease resulting in electrolyte imbalance, he had “no convincing and satisfactory histologic or laboratory evidence to support this theory”.

Dr Nemeth gave the date of death in his estimation as April 24th, six days before the body was found.

Mr O’Dwyer said Ms Mehran appeared to have become reclusive as she threw herself into the task of writing a book. There was absolutely no evidence as to what had happened in the apartment, he added. Therefore, he felt the appropriate ruling was an open verdict.

Ms Mehran’s former husband, Chris Collins, who lives in New York, did not attend the hearing.

Ms Mehran was born in Tehran but migrated with her family to Argentina in 1979 at the time of the Iranian Revolution.