Man with locked-in syndrome expressed wish not to continue living

‘He had a happy life, he was just tired,’ says sister of man who fell from bicycle 16 years before death 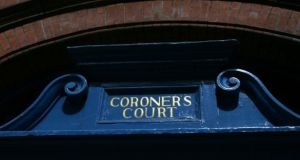 A man developed locked-in syndrome after delayed surgery following a fall from a bicycle, an inquest has heard.

Anthony Mason, from Artane, Dublin 5 was a passenger travelling on the crossbar of a bicycle when the accident happened at Mountjoy Square in Dublin on September 9th, 2002. He was 23 at the time.

Dublin Coroner’s Court heard Mr Mason hit his head on the footpath as a result of the fall. He displayed no symptoms initially but collapsed less than an hour later at St Stephen’s Green.

“He was on a pushbike with somebody and a car pulled out and he hit his head on the footpath,” Mr Mason’s sister Denise Mason said.

He was rushed to St James’s Hospital. A CT scan revealed a blot clot on his brain and he was transferred to Beaumont Hospital for surgery on September 14th, 2002.

“The doctor said if he had seen him earlier he could have done more for him,” Ms Mason said.

Mr Mason never fully recovered and was diagnosed with locked-in syndrome after surgery.

He returned home to the care of his family where he remained for 16 years before his death.

“He never spoke again. Mam came up with an alphabet to communicate with him. He couldn’t move, only his eyes, head and thumbs,” Ms Mason said.

Mr Mason communicated using his eyes and computer technology, the inquest heard. He was cared for by family and visited regularly by friends. He enjoyed following football and watching comedies on TV.

Ms Mason became his primary carer following the death of their father in 2005 and mother in 2013.

Mr Mason had hoped that stem cell research could improve his condition and when this was ruled out he expressed a wish not to continue living. “He had a happy life, he was just tired,” Ms Mason told the court.

He declined food and water and was assessed by a psychiatrist who found him capable of making this decision. A palliative care plan was put in place and Mr Mason died at home on May 4th, 2018, surrounded by his family, at age 39.

The cause of death was spastic quadriparesis in locked-in syndrome following a fall from a bicycle 16 years previously. Coroner Dr Myra Cullinane returned a narrative verdict tracing the circumstances of death back to the fall.

“All of the reports demonstrate that he was very much loved and very well cared [for] and still very much part of the family…hopefully in some way he is at peace now,” the coroner said.