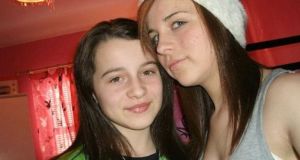 Shannon Gallagher (right) was aged 15 when she died on December 12th, 2012, just weeks after her younger sister Erin (13) (left) also took her own life. Photograph:

A family who were fostering a teenager when she died by suicide said they could not recall being told that the girl had previously tried to self-harm, an inquest has heard.

Shannon Gallagher (15) died on December 12th, 2012, in the home of Gerard and Karen Doherty in Stranamuck, Castlefin, Co Donegal. Her death occurred just weeks after her younger sister Erin (13) took her own life.

All agencies who gave evidence during the inquest into Shannon’s death, which was held in Letterkenny on Wednesday, said the Dohertys had been an excellent foster family for Shannon.

Patsy Gallagher, solicitor for Shannon’s mother Lorraine, asked the Dohertys if they had been told by social workers that Shannon had tried to self-harm in the past, which resulted in her being hospitalised.

Mr and Mrs Doherty said they could not recall being told that Shannon had previously tried to self-harm on October 23rd, four days before Erin’s death on October 27th, 2012.

Social worker Karen McCormack said her recollection was that the Dohertys were told there had been incidents of self-harm but that the dates had not been specified.

“Based on the information that the foster carers were relaying and my meetings and home visits and keeping a steady eye on the case, we definitely had no indication that Shannon would do what she did,” she said.

Ms Doherty said there was no indication that Shannon had any inclination to take her own life.

Alan Thompson, principal of Finn Valley College where Shannon was a pupil, gave an account of her time at the secondary school in Stranorlar. Mr Thompson was not working at the school at the time but he said Shannon was regarded as a pleasant student of average academic ability who had occasional outbursts of bad temper.

He confirmed that on October 23rd, 2012, Mr Gallagher arrived at the school and confirmed that Shannon had attempted to take her life and that there were other reports of self-harm.

Emlyn Hughes, principal social worker with Tusla, said they were fully aware that Shannon was a high risk and that this was reflected in their actions. He said the foster parents would also have been aware of the risks.

He said that normally a child in foster care would receive one visit in the first month but that Joe Nellis, a social worker, visited the Doherty home five times in the 12 days Shannon was staying there. “I have no shadow of doubt that while we did not go into details they would have been aware of the risk that this child would have needed monitoring above and beyond the norm.”

The jury of six men and six women found unanimously that Shannon died by suicide.

The jury foreperson said: “We were a bit shocked that only one visit was required by Tusla to children in foster care within the first month. We feel that one is not enough,” she said.

Tourists with plans to travel to China should be able to cancel at no cost 17:19
Mother of three McGinley children appears in court charged with their murder 17:08
Girl (7) settles case over alleged brain injury at birth for €5.8m 16:55
Fianna Fáil promises to ban credit card betting if elected 16:54
Man dead in ‘superloo’ for up to 20 hours before discovery 16:39