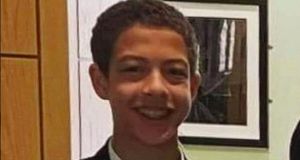 A book about the disappearance and death of Belfast schoolboy Noah Donohoe last year has been referred to the Attorney General.

The 14-year-old boy’s mother Fiona described the publication as “trespassing on her grief”.

The matter was mentioned during a preliminary hearing at Belfast Coroner’s Court ahead of an inquest into Noah’s death scheduled to start next January.

A call was also made for information around claims the teenager had been assaulted in Belfast city centre on June 21st before he went missing.

His body was recovered from a storm drain close to the M2 motorway about a week later following a large-scale community search effort.

Niall Murphy, acting for Ms Donohoe, said she wishes to formally and publicly distance and disassociate herself from the book, which has been self-published by the author.

“She considers that book and its promotional literature trespasses on her grief and she considers it to be very unhelpful in the context of the truth recovery and notes that it must be completely devoid of any specific facts that may emerge at an inquest,” he said.

“The publication of the book is an abuse of the court’s previous direction.”

Coroner Joe McCrisken said he has referred the publication to the Attorney General Brenda King.

“The only person that is in possession of all of the facts is me because I have all of the statements and forensics, and the police officers of course who provided those to me, and none of that information has as yet even been made available to the next of kin, let alone any other individual,” he said.

“I was made aware of it (the book) on Friday of last week and have referred to matter to the Attorney General.”

A representative for the coroner added a reminder to all not to disseminate or publish any material which “has the potential to impede or seriously prejudice the inquest”, pointing out that no decision has yet been made on whether a jury will be involved with the inquest proceedings.

Earlier in the hearing, Mr Murphy made an appeal to businesses in the Royal Avenue/North Street to check CCTV footage from the evening of June 21st.

“We are aware that there is a line of inquiry ... in respect of statements received by police that Noah may have been assaulted as he cycled through the city centre and we would appeal for anyone with knowledge of this event to immediately attend with police,” he said.

“We have reason to believe that there is particular and specific knowledge of this assault in the homeless community and with those struggling with addiction issues in the city centre and also people who may have been resident at the Queen’s Quarter Housing Association in University Street.

“We appeal for businesses on Royal Avenue, between the junction of the bottom of Royal Avenue and North Street, and the Belfast Telegraph building to review their CCTV on June 21 and make this available to police.”

Mr McCrisken said it was his understanding that an individual came forward to police with an account, that some of what was initially said has been “clarified”, but inquiries are ongoing.

The full inquest is set to be heard at Belfast Coroner’s Court on January 10th, 2022.

Counsel for the coroner said that was the very first date available, pointing out there are “serious practical problems securing court venues caused by the Covid-19 emergency”.

Mr McCrisken said he is “entirely confident” the inquest will start on that date.

“I have nine months worth of inquests that were listed last year to commence from March right through until December that couldn’t be heard, and those families have the right to have their inquests heard also, so that’s why we don’t have courtroom availability between now and 2022,” he said. - PA