Concerns over paths on Croagh Patrick ahead of Reek Sunday 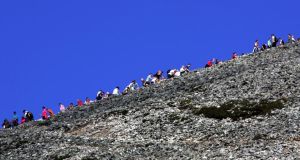 With over 30,000 pilgrims set to climb Ireland’s “Holy Mountain” on Sunday for the annual reek climb, concerns have been raised over lack of progress on repairing treacherous paths on Croagh Patrick in Co Mayo.

Last December, a report, commissioned by Mountaineering Ireland, was the central reference point for the seminar. Carried out by Elfyn Jones of the British Mountaineering Council, it said the mountain, increasingly used by extreme-sports enthusiasts, needed a “large-scale intervention” estimated to cost €1 million.

Speaking ahead of Reek Sunday, which takes place on the last Sunday in July, Robert Hunt from Mayo Mountain Rescue stressed the urgency of remedial works, particularly along the steep conical area which is covered by loose shale.

Last Saturday, the Irish Coast Guard Rescue 118 helicopter had to airlift three casualties from the mountain in separate rescues.

A group of stakeholders – which includes Mayo County Council, Fáilte Ireland, church representatives and local residents – was established in recent years to assess and plan the future of the mountain. However, according to Mr Hunt, the group has not met recently.

He confirmed that last Saturday afternoon two women and a young man were airlifted to Mayo General Hospital after suffering leg and head injuries.