Woman guilty of false report of rape by ‘Pakistani-looking’ man 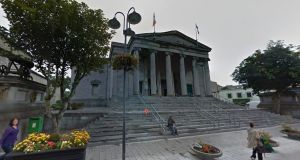 Central Criminal Court in Tralee: “I feel bad. I shouldn’t have put anyone through it,” said the woman on trial

A 26-year-old woman has been found guilty at the Circuit Criminal Court in Tralee of making a false report of rape.

A jury of nine women and three men took just under an hour to return the unanimous verdict at the end of a four-day trial in which a graphic rape account was read to the jury.

Jacinta O’Connor, of Steelroe, Killorglin had denied “knowingly” making a false report of a rape and wasting Garda time.

The jury heard how, on the night of the 2014 All-Ireland football final, in which Kerry beat Donegal, Ms O’Connor, who had been drinking in Killarney, went to the Garda station at 4am and gave a detailed account of being raped by “a Pakistani-looking” man in a green hoodie, at the rear of the town’s court house.

Gardaí believed she was sober when she made her complaint.

She had become separated from her friends and did not have her handbag or phone. She told gardaí she had been attacked after leaving the Grand Hotel nightclub.

Gardaí launched an investigation and identified a man in a green hoodie, a Czech national, who was seen on CCTV at around 3.50am walking behind Ms O’Connor on Plunkett Street.

The man was interviewed under caution and denied having any sexual contact with her. He handed over the green hoodie and samples.

By October 4th, gardaí who harvested images from around 30 locations, felt they had spotted discrepancies in Ms O’Connor’s account.

They saw Ms O’Connor had not, in fact, left the nightclub on her own, but was with a man.

Shown the images on October 10th, she withdrew her complaint and said she was sorry, she did have consensual sex with this man whom she knew, and had not been raped. It was rough sex , in an underground car park around four minutes from the courthouse car park, and she was upset and alone and had no way home, she said.

She also said the people in the sexual assault unit in Cork where she was examined “said I had been raped as there was blood and traces inside in me”.

“I now know it was stupid. I feel bad. I shouldn’t have put anyone through it,” she said.

Ms O’Connor has been remanded on bail to January and Probation and Medical reports have been ordered by Thomas E O’Donnell.