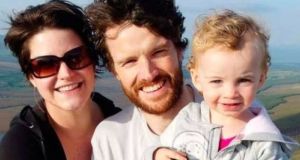 Estlin Wall with her parents Amy and Vincent

The mother of Estlin Wall (3) said she is “very disappointed” at the sentence for the man whose careless driving caused her daughter’s death three years ago.

Amy Wall was speaking outside Ennis Circuit Court on Monday after Judge Gerald Keys imposed a combined fine of €1,500 on a truck driver for the careless driving causing the death of Estlin Wall (3) and serious bodily harm to her father, Vincent Wall .

The judge also imposed a four-year driving disqualification, saying “I’m conscious that this man cannot earn a living for at least four years”.

Estlin was days from her fourth birthday when she died and in response to the judge’s comment, Amy Wall from her seat in court said: “That’s how old my daughter was – four years.”

In response, the judge said: “I have set out in great detail the reasoning behind this judgement and it should be seriously considered in depth.”

He said earlier: “In these type of cases, there are no winners or losers. This is a very tragic case which I considered for a lengthy period of time and with great difficulty.”

He said Mr O’Flaherty had expressed remorse, that there was no speed and no alcohol concerning, the accident and had pleaded guilty.

Speaking outside the court Ms Wall, who is pregnant with the couple’s third baby, said: “It is hard to feel that just losing your licence is enough for what we have lost and what Estlin has lost.

“We are very disappointed, it doesn’t feel right for the consequences.”

Estlin was killed in a collision moments after Mr O’Flaherty went to pull out from behind a bus. Vincent Wall was driving his daughter to creche and suffered a severe brain injury, has no recollection of the collision and missed Estlin’s funeral.

Speaking on Monday Mr Wall said “The recovery is so slow it is actually hard to tell if I have improved really. It feels like I have just gotten good at being injured.”