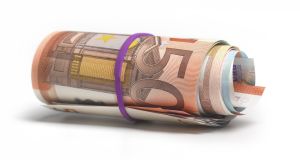 The money was spent within three weeks on drugs, socialising with friends, gambling, a new bed and a PlayStation

A teenager who had “an incredible temptation presented to him” two days after his 19th birthday when his former employer mistakenly lodged almost €20,000 into account has been jailed for theft.

Karl Smith (19) was due to get wages of €196.36 for two days’ work with Industrial Insulation Specialists but €19,636 was lodged to his account when the decimal point was put in the wrong place during the bank transfer.

Dublin Circuit Criminal Court heard that Smith was anxiously awaiting his wages and was “flabbergasted” when he rang his bank to check his balance. He withdrew most of the cash over three transactions before spending the balance through use of his Laser card.

Shaun Smyth, defending, said it was a bizarre and unusual situation and when the money fell into his client’s lap, “an incredible temptation was presented to him”.

He said Smith was in a very low place at the time. He had a drug debt of €1,000 and he “felt like all his prayers had been answered”.

“It was a gift from God as far as he was concerned,” Mr Smyth said.

Smith spent the cash within three weeks on drugs, socialising with friends, gambling, a new bed and a PlayStation.

Smith of Rutland Avenue, Crumlin, Dublin 12 pleaded guilty to theft of the cash from John Naughton on January 21st, 2016. He has 17 previous convictions including one theft, assault, making threats and criminal damage.

She accepted that Smith was “particularly vulnerable” when the funds landed in his bank account and acknowledged that a psychiatric report concluded that he suffered from chronic social anxiety and very low self-esteem.

The judge said, however, that it was a substantial theft which “undoubtedly” had some effect on Mr Naughton’s business.

The couple made efforts to get Smith to return the cash by phoning him and sending solicitor’s letters to his bank but there was no response. They then contacted the Garda to investigate the theft.

Garda Young said Smith was arrested in Cloverhill Prison last June where he was serving a sentence for assault. He made no comment during interview.

None of the cash has been recovered, and Smith has not made any repayments.

Garda Young agreed with Mr Smyth that his client was addicted to cocaine at the time and would not have been used to having large amounts of money.

Mr Smyth said his client accepted that although he didn’t know how the money had been lodged into his account, he knew he was not entitled to it.