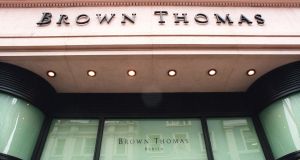 The handbags were noted as missing during a stocktake and CCTV footage was downloaded and given to gardaí.

A serial shoplifter has been jailed for stealing designer handbags from a Dublin department store.

Sergeant Eamon Lynch told John Quirke BL, prosecuting, that the bags were worth €10,150. The handbags were noted as missing during a stocktake and CCTV footage was downloaded and given to gardaí.

The footage showed a woman hiding the three handbags in her own bag. Gardaí ­ were able to nominate Gaffney as a suspect and she was arrested.

She was on bail for another offence when she carried out this theft and has been convicted of further crimes since.

Sgt Lynch agreed with Luigi Rea BL, defending, that his client has three sons. He accepted that she had “no other matters outstanding against her” and she had made “a huge effort to turnaround her alcohol problem”.

Gaffney’s sister told the court that Catherine reared her two younger brothers and her sons and “they are all doing very well”.

Mr Rea said his client had had two substantial falls in the recent past; one of which led to a fractured skull and she needed a hip replacement because of the second fall.

Judge Cormac Quinn sentenced Gaffney to two years in prison but suspended the final year of that term.