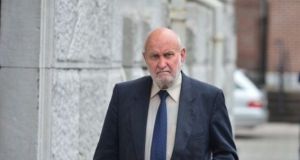 Leo Hickey: “I have no recollection of him.” File photograph: Provision

A retired school teacher (77) has been found guilty of sexually assaulting a young boy while teaching in a school in Co Cork in the 1990s.

But the jury at Cork Circuit Criminal Court took just an hour and five minutes to unanimously convict Hickey. Judge Sean O Donnbhain remanded him in custody for sentence on May 9th to allow for preparation of a victim impact statement.

Mr Kelleher (34) told the court that he was abused by Hickey over 20 times while in fourth class in the school. He said the abuse took place in a variety of locations, including in the toilets, corridor, school yard as well as while walking back from the hurling pitch at the rear of the school.

He could not remember the exact dates of the abuse and he conceded he may have been wrong when he told gardaí that he was 11. He said may in fact have been younger, but it began when Hickey started touching the back of his neck and touching his back inside his shirt in class.

He said he enjoyed the attention at first as it made him feel that he was special and a good pupil. But he now considered it grooming as it progressed from that touching in the classroom to sexual abuse in the toilets and at the playing pitches.

Hickey used to send him out with notes for other teachers while the caretaker was on his rounds. He would then follow him out and make him go into the toilet where he would abuse him by touching his penis while he would get out his own penis and get the boy to touch him.

Hickey was keen on music and they would make sticks for bodhrans and play the tin whistle in class . On one occasion, Hickey took his tin whistle, shoved it down inside his own pants and gave him back to him and asked him to play Amazing Grace and when he refused to do so, gave him lines.

He also told of another instance where Hickey abused him one evening walking in after hurling training when he put his hands on his genitals. He dropped a bunch of hurleys that he had been carrying and ran back to the classroom with Hickey blowing his whistle to get him to stop .

He said he regretted not telling people at the time. But he was young and feared Hickey. He denied a suggestion from John Devlin, defending, that he “spent a quarter of a century” making up the allegation of sex abuse.

“I spent quarter of a century, blocking it out,” he replied.

Mr Kelleher’s mother, Stephanie, confirmed she had a meeting with Hickey about her son staying back a year. And she recalled that her son only returned to the school the following September under duress and she recalled him rolling around the floor in their hall saying, “I’m dead, I’m dead”.

Hickey, who described himself as an old fashioned teacher who devoted more time than most to music, said he had no recollection of ever sending any pupil to another teacher with a note as there would be no point to it given he met his fellow teachers during break time.

And he said that he had absolutely no recollection of Mr Kelleher as one of his pupils. “If he was very troublesome or backward or very clever I might remember him. But he seems to have been a very much average middle-of-the-road student because I have no recollection of him.”

Hickey said there was no way he would leave 30 children alone during a tin whistle class to bring one boy out of the classroom and that it never happened. “I did not sexually assault him. I never brought any boy to the toilet. What reason would I have for bringing a boy to the toilet?”