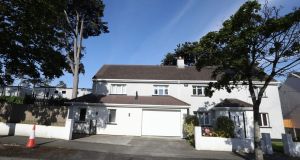 Trees on the grounds of Fingal Community College are seen next to the home of Daniel De Jong at Seatown Villas, Swords, Co Dublin. Photograph: Collins Courts.

A pilot has been landed with a significant costs bill after failing to recover damages for the alleged nuisance of bird droppings and falling branches from two listed protected species of Corsican pines in a neighbouring school’s grounds.

Dismissing Daniel De Jong’s €60,000 claim against Fingal Community College, Circuit Court President Mr Justice Raymond Groarke said the claimant had brought himself to the nuisance when he bought the house in 2012 and later extended it towards the trees, which are more than a century old.

Following earlier complaints by Mr De Jong to the college on Seatown Road in Swords, the college sought expert advice and had removed five of the trees in 2017 that could have constituted a danger and pruned others.

Mr De Jong, of Seatown Villas, Swords, said the college grounds adjoined his property and claimed two trees were in poor condition and suffered from soil erosion, root and bark damage and the loss of lower branches.

He told the court the trees were a nuisance because of falling branches, leaves and debris, bird infestation and bird fouling. The refused, despite repeated requests, to remove the two remaining trees he held responsible for the nuisance.

Mr De Jong contended the trees were a hazard to his home and family due to a risk of branches or a whole tree falling onto his property in stormy weather conditions.

A consultant arborist who was called to give evidence on behalf of Mr De Jong agreed in cross-examination by barrister Rob Lowe that the remaining trees had survived hurricane-like winds in recent years and could live for another 150 years.

Mr Lowe, who appeared with William Egan Solicitors for the college, said some of the trees considered a danger were felled but nobody, despite an assessment by experts, had recommended that the remaining two be cut down.

He told the court the college continued to have the trees inspected every year and would continue to have them assessed in the future. He said the top canopy, by the very nature of the Corsican Pinus Nigra trees, was an attraction to nesting birds.

Judge Groarke, in dismissing the claim, said there was no nuisance and if there was Mr De Jong had brought himself to it when he bought the house and extended it underneath the trees. He ordered Mr De Jong to pay the legal costs of the case.