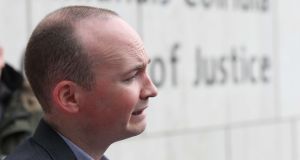 A trial date will most likely be set next month for Anti-Austerity Alliance TD Paul Murphy on charges of falsely imprisoning Tánaiste Joan Burton during a water charges protest in Jobstown almost 18 months ago.

Ms Burton and her entourage had left a graduation event at An Cosán Education Centre at Jobstown, Tallaght when a demonstration was held which delayed her for about two hours on November 15th, 2014.

She and her team had been attempting to travel by car to St Thomas’s Church for the rest of the ceremony when it is alleged violence broke out.

Mr Murphy (32) with an address at The Copse, Woodpark, Ballinteer appeared on Monday at Dublin Circuit Criminal Court along with 18 others, some facing charges of false imprisonment and violent disorder.

Tony McGillicuddy BL, prosecuting, told Judge Melanie Greally it was his understanding that a number of the accused are looking for trial dates, while others would like to see the indictment, a document outlining the specific alleged charges, before a trial date is set.

He said it was the State’s intention to sever the indictment into a number of separate groups with the possibility of four separate trials running.

Counsel said he had no issue if the accused people wanted the case adjourned to allow them time to consider this.

Conor McKenna BL, defending Mr Murphy, said his client will be contesting the case but wishes to see the indictment before a trial date is set.

Padraig Dwyer SC, defending Keith Preston (36) of Sundale Lawns, Tallaght, said there is an argument for a joint trial rather than splitting the case into separate hearings. He asked for the State to set out its terms in writing.

The court heard that one accused, Antoinette Kane (23) of Cloonmore Park, Jobstown, Tallaght, is due a baby imminently and her attendance was excused on the next occasion should she not be medically fit to attend.

Mr McGillicuddy asked Judge Greally to adjourn the case until April 4th next and asked that a period of four weeks be provisionally blocked off for April 24th 2017 to allow time for four potential trials.

He said the State will set out in writing by March 18th next the reasons it is looking to sever the indictment.