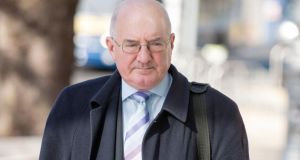 Former Anglo Irish Bank director Willie McAteer is already serving a three-and-a-half-year prison term imposed in July 2016 for his part in a €7.2 billion fraud. The latest sentence will run alongside this. File photograph: Collins Courts

Former Anglo Irish Bank executive Willie McAteer will not serve any extra time in prison for receiving a fraudulent loan in September 2008 in order to keep the bank from failing.

Imposing a sentence of two and a half years, Judge Martin Nolan said survival was the main motivating factor in the fraud trade.

McAteer, then director of finance at the bank, obtained the €8 million loan as the bank was on the brink of collapse.

McAteer is already serving a three-and-a-half-year prison term imposed in July 2016 for his part in a separate €7.2 billion fraud. The latest sentence will run alongside this.

Last month, McAteer (66), of Greenrath, Tipperary Town, Tipperary, pleaded guilty to obtaining a loan of €8 million from Anglo on September 29th, 2008 which he secured against his shares in the bank.

He then used the money to pay off a personal loan he obtained from Bank of Ireland.

The loan was formulated by Anglo’s executive board of directors to prevent the Anglo shares being sold off, which would have further damaged confidence in the bank. The maximum penalty available for the offence of fraudulent trading was seven years in prison and a €63,486 fine.

Imposing a sentence of two and a half years, Judge Nolan said that at the time, McAteer and executives in the bank were under considerable pressure and their whole ambition was survival.

He said there was a possibility that Bank of Ireland would sell off shares in the name of McAteer, as the shares were security against an €8 million personal loan to McAteer.

He said the bank did not want this to happen and “a plan was hatched to deal with this situation”.

“There whole ambition was survival. Survival is not a reason to commit crime. But it was a substantial motivating factor,” he said.

He said McAteer was a self-made man who came from a modest background and studied hard and worked very hard. He said he was at one point an extremely wealthy and successful man.

Judge Nolan said McAteer will be an impoverished man when he gets out of prison and will live in modest circumstances. He said it is highly unlikely he will reoffend.

Taking his age and personal circumstances into consideration, he said it would be unjust to impose a sentence consecutive to the one he is already serving. He ordered the sentence to start from today, January 23rd.

Last Monday, Garda Glen MacKessy of the Office of the Director of Corporate Enforcement said that prior to September 2008, McAteer, like most Anglo executive directors, had built up a substantial shareholding in the bank.

He said the directors in Anglo were encouraged to buy and hold large amounts of newly issued shares in the bank.

McAteer used five loans from Bank of Ireland to purchase a total of 3.3 million shares. These were recourse loans, meaning McAteer was personally liable if he defaulted.

The court heard Bank of Ireland had a provision where, if the share price fell below a certain ratio in relation to the loan, it could sell off the shares without consulting McAteer.

The sale of these shares would occur under McAteer’s name and would have to be disclosed to the market and the financial regulator.

Garda MacKessy said in 2008 Anglo’s share price began to fall drastically and Bank of Ireland could have sold McAteer’s shares if it wished. McAteer became aware of this and informed senior management at Anglo.

Anglo’s board of directors was concerned that a sudden sell-off of a director’s loans could have a disastrous affect on the overall share price.

A plan was formulated to refinance McAteer’s shares using a €8,246,307 loan from Anglo. This loan would be secured against the shares only and McAteer would not be personally liable.

The court heard Bank of Ireland had made no move to sell off the shares and had given no indication that it might.

Garda MacKessy said there was no evidence McAteer had a role in designing the scheme.

The garda said he signed the loan documentation when he was presented with it. Once the loan went through, Bank of Ireland released the shares as security and closed McAteer’s loan accounts.

All this took place on September 29th, 2008, the same day as the then government issued a blanket guarantee to the banks.

In January 2009, McAteer was asked by Anglo’s chief financial officer Matt Moran to make himself personally liable for the loan. McAteer agreed.

Gardaí­ interviewed McAteer in 2010 and he admitted it was his signature on the loan documents.

He said he had not come up with the terms of the loan but that he accepted them. He said he did this because the sale of the shares could have a catastrophic affect on the bank.

Pat Whelan, Anglo’s former director of lending, said during interview that he had been instructed to have his lending team prepare the loan documentation. He identified his own signature on the loan documents.

He was sentenced to three and a half years in 2016 for conspiracy to defraud involving interbank loans worth €7.2 billion.

In 2014 both he and Whelan were given 240 hours’ community service by Judge Nolan after engaging in an illegal share support scheme.

Patrick Gageby SC, defending McAteer, said his client was supposed to retire before the bank started to collapse but that he stayed on because his help was needed.

He said if he had retired at the right time he would have done so “with great advantages and a good amount of money”.

Counsel said the offences resulted in no loss to the bank. He said there were no more pending charges against McAteer and that this case would mark “a poor end to his career”.

Last week, Whelan was fined €3,000 for failing to keep a proper record of the fraudulent €8 million loan to McAteer.

Brendan Grehan SC, who appeared for Whelan, said this was also the last legal matter concerning his client.

He said these investigations had been “hanging over him for seven years” and that he now wanted to start rebuilding his life.