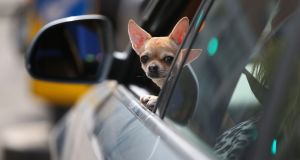 A recovering drug addict has described as “completely bizarre and ridiculous” his multiple failed attempts to steal cars while high on crack and holding his pet chihuahua.

Multiple residents of a housing estate in Lusk, north Dublin described how Thomas Cahill Donohue (35) threatened them with violence and tried to steal various cars while holding onto the dog.

Donohue pleaded guilty to 12 charges including burglary, attempted robbery, criminal damage of a car, unlawful use of a car, threatening to injure a number of people and assaulting a garda.

Judge Martin Nolan imposed a sentence of three and a half years, backdated to January 1st.

Defence lawyers told Dublin Circuit Criminal Court that on October 25th, 2019, Donohue was out walking the family dog near his then home at Sheepmore Gardens, Blanchardstown when “an acquaintance” asked him to drive a car to Lusk for an NCT.

Donohue was on a driving ban but agreed to do it after this man offered to pay him €150. On the way to Lusk, he became suspicious ecause the car was only three years old. He then clipped a wheel of the car on a roundabout, rupturing the tyre. He managed to pull into the Whitethorn Walk estate where he crashed into two other cars.

Residents told gardaí that they were shocked and terrified as Donohue approached them one after another and tried to take their cars from them.

One woman said that Donohue told her “give me your keys or I’ll shoot you” and she panicked. A neighbour said he saw her struggling with Donohue and screaming for him to get away.

Donohue turned to him and told him he had AIDS and that he would stab him with a syringe. The court heard that at all times Donohue had a chihuahua “nestled” in his arms.

Donohue pushed past some residents who had opened their front door at the commotion and took car keys but other neighbours repeatedly stopped him from driving off by taking the keys back out of the ignition.

One man told gardaí ­ that he was absolutely terrified for himself and his wife when he had to confront Donohue after he pulled the man’s wife out of her car. The woman said that the man was holding a dog and kept saying “I need to get out of here”.

Lawyers for Donohue said their client panicked after crashing the car because he knew gardaí would be on the way.

In a statement to the court, Donohue said he was “full of crack cocaine and tablets” at the time. He said he was extremely sorry. He said he is now clean of drugs and for the first time was asking a court to let him enter residential drug treatment.

“The crimes I committed were unplanned and were completely bizarre and ridiculous,” he said.