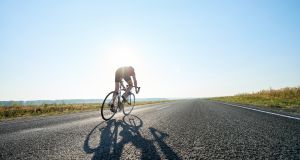 A Dublin man took part in a triathlon only five weeks after allegedly suffering ‘incapacitating injuries’ in a cycling accident, the Circuit Civil Court has heard. File image: iStock.

A Dublin man took part in a triathlon only five weeks after allegedly suffering “incapacitating injuries” in a cycling accident involving a hit and run driver, the Circuit Civil Court has heard.

A €60,000 damages claim by Graham Dunne (41), of Castlecurragh Park, Blanchardstown, was thrown out on the basis he had given misleading information regarding his medical history.

Mr Kearney, who appeared with solicitors Stephen Mackenzie and Co, told the court that Mr Dunne, a telecommunications engineer, had misled a doctor about his past medical history.

He said that during an examination by Dr Pat O’Neill, a sports injury specialist, Mr Dunne had concealed information about a second accident at the National Aquatic Centre in which he had sustained head and neck injuries. The matter was settled out of court for €20,000.

Mr Dunne alleged in his MIBI claim that he had suffered injuries to his chest wall, spine, right elbow and forearm and right calf when knocked off his bicycle on Main Street in Blanchardstown last July.

He denied deliberately attempting to hide the fact he had suffered similar injuries in the earlier accident.

Mr Kearney told the court that in accordance with Section 26 of the Civil Liabilities and Courts Act a court shall dismiss a claim where it considers a claimant has given evidence misleading in any material respect unless dismissal of the action would result in an injustice being done.

When closely examined about his failure to disclose the relevant injuries suffered in the Aquatic Centre accident, Mr Dunne said it may have been due to his naivety or stupidity.

Judge Groarke, in dismissing Mr Dunne’s claim and directing that he pay the MIBI’s legal costs, said the claimant was an intelligent and well educated man and the questions he had been required to answer were relatively straightforward and uncomplicated.

Mr Dunne had been asked to give Dr O’Neill a medical history including previous accidents and hospitalisations and had merely stated that he had sustained minor sports injuries and skin lacerations when playing hurling and a skin burn injury to his right shoulder in childhood.

Judge Groarke said there had been complete silence when it came to the surgical examination and medical treatment he required following the Aquatic Centre accident, in which he had to have stitches inserted in a head wound.

“It is compelling me to the conclusion that the plaintiff was misleading Dr O’Neill by failing to give him all the relevant details, not because of a misunderstanding but because of a determination not to reveal the Aquatic Centre accident,” Judge Groarke said.

“Once I find that is the case then his credibility in respect of otherwise plausible bits of information goes out the window. I cannot find any possible reason as to why I would consider an injustice would be done by dismissing the claim.”