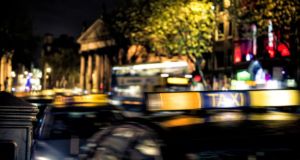 A man who was freed in 1998 under the Good Friday Agreement from a 20-year prison sentence for explosives and firearms offences was held by a judge on Friday to be a suitable person to hold a licence to drive a taxi.

John Conaty, of St Attracta Road, Cabra, Dublin, because of his court convictions, was due under new stringent new taxi licencing legislation to face disqualification from driving or operating a taxi.

He applied to the Circuit Civil Court for an order directing that he was a suitable person, and not of any threat or danger to the public, to drive a taxi. The court heard he had been disqualified but that it had been suspended since April 6th pending the application.

Barrister Ruadhan MacAodhain, counsel for Mr Conaty, told the court that in 1996 his client had been convicted by the Special Criminal Court of offences under the Explosive Substances Act and the Firearms Act and sentenced to 20 years imprisonment.

He said the Good Friday Agreement, which had come into being in April 1998, had allowed for the release of all paramilitary prisoners under a ceasefire. Terms of the Agreement between the British and Irish Governments also allowed for assistance in the reintegration of such prisoners into society, their further education and assistance in finding employment.

Mr MacAodhain said Mr Conaty had been a licenced taxi driver in the Republic since 2002 but under new legislation governing the holding of a Small Public Service Vehicle Licence he would be disqualified from this month from holding such a licence because of his previous convictions.

He told the court the 2013 Taxi Regulation Act applied retrospectively to anyone who had historic convictions.

Mr MacAodhain said Garda Superintendant David Taylor had written to Mr Conaty pointing out the effect of the new legislation on his work as a taxi driver and had advised him of his entitlement to seek an order in the Circuit Court permitting him to continue his taxi work.

Superintendant Taylor told the court that Mr Conaty had not come under adverse notification of the gardaí since his release.

Mr MacAodhain also opened two character letters from Mr Conaty’s former employer, The Cobblestone Pub in Smithfield, Dublin, and from Cumann Baire Setanta GAA Club where he has very successfully managed the promotion of under-age teams and is a senior hurling team selector. He was also complimented in the GAA letter for his community work.

Judge Linnane said that having read evidence of Mr Conaty’s community work and having heard the evidence of Superintendant Taylor she was satisfied Mr Conaty was a suitable person to be allowed to continue to hold a public service vehicle licence.

Mr MacAodhain said that both the High Court in the Republic and in Northern Ireland had held that it would be “injurious” to have taken into consideration convictions other than within a period of 10 years. He said disqualification from holding a taxi licence would rob Mr Conaty of the right to make a living.

Following decision Mr Conaty said he had been in the taxi business without incident for the past 12 years.

“I just want to earn a living and to be allowed to continue on the way I am at present,” he said.