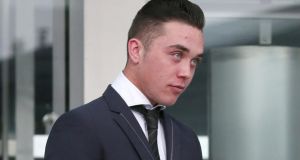 Aaron O’Neill paid his friend to make the call from a payphone outside Hammond’s home. Photograph:Collins

A former subcontractor for Intel who asked his friend to make a hoax bomb call to the company because he didn’t want to go to work may be ordered to carry out community service.

Aaron O’Neill (20) had been out drinking and taking tablets with his friend Colin Hammond (21) when he decided he did not want to go in the next day.

He paid his friend to make the call from a payphone outside Hammond’s home.

The resulting 999 calls shut down a motorway, disrupted air traffic control and prevented 4,000 Intel staff from going to work. Garda Eamonn McFadden said that at a “conservative estimate” the incident lost Intel 6,000 hours of production.

Mr O’Neill of Chieftains Drive, Balbriggan and Hammond of Bath Road, also in Balbriggan, pleaded guilty at Dublin Circuit Criminal Court to making a false report on the Bath Road on January 13th 2015. Neither man has previous convictions.

Mr Hammond told the operator there were bombs located at Intel which would go off in 12 hours.

“You will not find them. This is a warning, we’re everywhere now,” Hammond told emergency services. When asked who was making the call, he replied: “Islamic State.”

Described by Judge Martin Nolan as “profoundly stupid”, Hammond claimed he had been paid to make the call. He was ordered to carry out 200 hours community service in lieu of a two year prison sentence when his case was dealt with in October.

On Tuesday Judge Nolan said he saw “no reason to depart from the same sentence” for O’Neill but adjourned the case to January to get a report from the Probation Service to see if he was suitable for community service.

He said, “to put it politely” it had been a misconceived plan and accepted that the men hadn’t envisaged the calls to have the effect they did.

“It is a very, very strange way to avoid going to work,” Judge Nolan said .

Gda McFadden told Paul Carroll BL, prosecuting, that O’Neill was questioned and made a cautioned statement but took no responsibility, claiming he didn’t know who made the calls and didn’t ask anyone to make them.

He was arrested in March when he admitted that it had been his idea. He said he had taken tablets, didn’t want to go to work the following day and asked Hammond to make the calls.

He said there had been no set plan but it was decided that 6am was a good time to make the call and that it should be made from the phone-box on Hammond’s street. He told gardaí he was sorry but added that he didn’t think it was going to be a big deal.

Gda McFadden agreed with James Dwyer BL, defending, that it had been a spontaneous decision and the only evidence against O’Neill were his own admissions.

Gda McFadden said that 300 employees were evacuated from Intel and a further 3,700 staff were prevented from entering the site.

He told Mr Carroll that the M4 motorway was closed and there was also disruption to air traffic control in the location before authorities realised it was a hoax.

He said that one person prevented from attending Intel was O’Neill who was getting a lift to work there as a subcontractor with his father.

Gda McFadden said that a month after the hoax, a taxi man arrived at Balbriggan Garda station with a passenger who wouldn’t pay his fare. The passenger was Hammond and a garda at the station recognised his voice from the hoax call.

Hammond admitted he had made the call on his friend’s behalf saying: “He hates work and I made a phone call so he wouldn’t have to go to work.