Alan Custy is to plead guilty to theft of €14,650 from woman 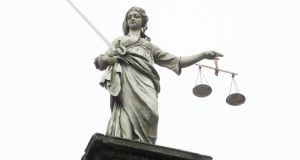 Alan Custy (38) is to plead guilty to the theft of €14,650 from a woman over a period of five months. File photograph: Alan Betson

A 38-year-old man accused of the theft of €14,650 from a woman is to plead guilty to the charges against him.

Alan Custy, of Dun na hInse, Lahinch Rd, Ennis, Co Clare, is currently complying with strict bail conditions that he refrain from monitoring or creating accounts or profiles on the Smooch, Plenty of Fish and Community Singles dating websites.

Mr Custy is charged in connection with five separate counts of stealing €14,650 from the woman over a five-month period in 2013.

In Ennis Circuit Court, solicitor for Mr Custy, Tara Godfrey, told Judge Tom O’Donnell, “that there is an indication that there will be a plea in respect of Mr Custy and we are asking that the matter be put into June 23rd for arraignment”.

Det Claire O’Shaughnessy had told a previous sitting at Ennis District Court that, when originally charged with the offences, Mr Custy responded: “I didn’t steal anything off her, how did I steal money off her?”

In relation to a separate charges, Mr Crusty had said: “Same as the last one, I didn’t steal anything off her. I’m not denying she didn’t give me loans, but I’m trying to pay her back. I’m trying to get work and I’m opening my own company.”

Mr Custy said that he had the same reply to the remaining charges.

The penalty for those convicted of stealing under Section 4 of the Criminal Justice Act in the Circuit Court is a fine or a prison sentence of up to ten years.

At a previous appearance at the court, counsel for Mr Custy, Patrick Whyms BL, told Judge O’Donnell that the evidence in the case “is quite complicated”.

In reply, counsel for the State, Stephen Coughlan BL, said that if the State were to be put on full proofs in respect of the evidence, “the trial would take a week”.

Judge O’Donnell ordered that Mr Custy appear before the Circuit Court on June 23rd, where he would be arraigned on the matter.