Man jailed for south Dublin car-jacking of woman and children 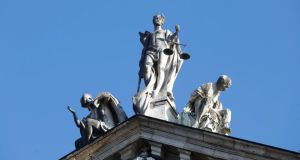 A Tipperary man who threatened to Taser a woman and take away her children during a car-jacking in south Dublin has been sentenced to five years in prison.

A Tipperary man who threatened to Taser a woman and take away her children during a car-jacking in south Dublin has been sentenced to five years in prison.

During the 30-minute incident, Francis Gavigan (41) sought to reassure the two children in the car and showed them a memorial card of his late mother.

He said he was a “bad apple” and hated doing this but he was desperate and could not rob banks any more.

Gavigan told the two boys they were lucky they had nice parents and said he had grown up in an “awful place surrounded by bad people”.

Gavigan pleaded guilty to the robbery and false imprisonment of Eleanor McCarthy on May 16th, 2014 in the Dublin 6 area.

“It is hard to know what would go through a person’s mind when a stranger jumps into your car and takes control of your life, with the added worry of what this man might do to the two children,” he said.

However Judge Nolan said he was satisfied that Gavigan at no time intended to harm Mrs McCarthy or the children.

Garda Patrick Farrell told Garrett McCormack BL, prosecuting, that Ms McCarthy had been at the junction of Zion Road and Orwell Road when Gavigan jumped into the passenger side.

He threatened her with something black and rectangular and told her to stop beeping the horn or he would Taser her. “You’ll pass out and I’ll take the boys,” he warned.

When Gavigan heard that Ms McCarthy’s daughter was waiting to be collected from school, he told her to go and get her as he didn’t want her standing outside.

Ms McCarthy drove through the school but didn’t stop as she was terrified of what might happen to her daughter if she got into the car.

Gavigan made Ms McCarthy drive to her home and got one of the children to fetch her wallet from the house. She then drove to the nearest ATM and withdrew €600 from AIB for Gavigan.

When Ms McCarthy got back into the car she did a u-turn to try and make her position known by this driving manoeuvre. She dropped Gavigan near the canal and contacted her husband and gardaí­.

Gavigan was arrested the following day in Tipperary and confessed to the car-jacking, saying he owed money to a dealer and had to feed his €600-a-week heroin habit.

Gavigan has 34 previous convictions, including 10 unauthorised taking of vehicles and theft using violence.

Remy Farrell SC, defending, said Gavigan’s crime had been one of “utter desperation” rooted in his drug addiction and accompanied by a “bizarre degree of reassurance”.

He said Gavigan asked after Ms McCarthy and said he felt really sorry for what he had put her and the two kids through.

Mr Farrell said his client acquired a serious drug addiction while in prison but had since been offered help from the Peter McVerry Trust.

The court heard Gavigan was doing well in Limerick Prison and engaging with the chaplain there. The sentence was backdated to May 17th, 2014.