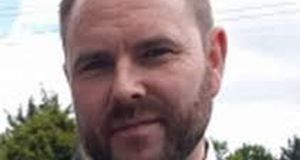 Assault victim Graham Tobin: his wife said it was difficult enough to accept he had died from a violent assault but this was compounded by the way he was left lying ‘for hours’ in ‘a stranger’s house’ while critically injured.

A 27-year-old Co Monaghan man who caused the death of a popular chef and father of four in a “single-punch” incident has been sentenced to eight years in prison.

Francis Hughes of Sruth an Iuir, Oram, Castleblayney had admitted assaulting Graham Tobin (41) at about 6am on Sunday October 7th 2018 at the same address where they had been attending a party to watch a Conor McGregor fight in Las Vegas.

In passing sentence on Wednesday at Cavan Circuit Court, Judge John Aylmer said that, while the case could be described as a single-punch manslaughter, it was an “exceptionally serious one”.

He said the aggravating features included the unprovoked nature of the attack, the severity of the punch that had in itself caused severe fractures to the nose, the dangerous circumstances in which Mr Tobin had been standing on a step above a patio, and the fracture that he sustained to the rear of his skull as a result of being knocked backwards onto the concrete.

The judge also noted the accused’s “expression of satisfaction” at having knocked the man out, and the subsequent failure to seek medical attention for Mr Tobin for about four hours, during which the defendant also prevented others from seeking such attention in order to avoid personal culpability.

Judge Aylmer also referred to the suggestion by Hughes at one point that the injured man could be put in the boot of his own car and dumped.

Even though no medical evidence was given to show that an earlier intervention might have saved Mr Tobin, the judge said it was safe to assume that the delay did not help, and that this had been stated in evidence from Sergeant John Daly as being the view that a number of doctors had expressed.

It was noted that the accused had 74 previous convictions, which were for offences including public order, drink driving, road traffic breaches, drugs offences, criminal damage and burglary, with only one having been for an assault.

All these aggravating factors placed the case on the upper end of the mid-range of seriousness for manslaughter, thereby meriting a 10-year prison term before taking mitigating factors into account.

Stating that he was obliged to consider these factors also, Judge Aylmer cited the early guilty plea and the defendant’s expressions and letters of remorse and apology.

Hughes had also been making good use of his time in prison to date and participated in an Alternatives to Violence programme.

The judge said he was reducing the sentence to eight years on that basis.

Members of Mr Tobin’s family left the court immediately after sentencing, including his wife, Ramona and sister, Leah, both of whom were visibly upset but opted not to comment on the sentence.

During the hearing of evidence at Monaghan Circuit Court three weeks ago, Judge Aylmer had been told that Mr Tobin never regained consciousness after the incident, and that he died at Beaumont Hospital on 18th October - 11 days after the assault - as a result of injuries to the head and brain that included a fractured skull.

Sergeant Daly had stated that a number of those at the house had reported that Hughes initially claimed that the injured man was fine, and that he pulled down the blinds, locked the doors and asked people not to call an ambulance while stating, “I’m not going back to jail.”

In a victim impact statement, his wife Ramona outlined the devastating impact of his death on his whole family, including their four sons - aged three to 12.

She said it was difficult enough to accept that her husband had died from a violent assault but this was compounded by the way he was left lying “for hours” in “a stranger’s house” while critically injured - an action that she believed had clearly impacted on his chances of survival.

“It makes me sick and I will never get over it,” Mrs Tobin said.