Man jailed for assaulting his infant child and ex-partner 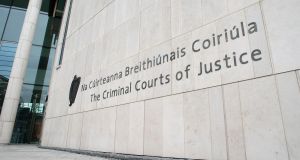 Court told of incident where man, who had taken tablets, began hitting the woman with his closed fists and dragging her back when she tried to get away from him by leaving the house. Photograph: Dave Meehan

A man has been jailed for two years for assaulting his infant child and his ex-partner in two separate violent incidents.

The earlier incident took place at the woman’s home in Skerries, north Dublin on September 18th, 2019 when the man, who cannot be named to protect the anonymity of the child, went to the home of the mother of their child.

The court heard that he struck her repeatedly around the head while she was still holding the three-month-old baby. At one stage he pushed the woman up against a wall and the child’s head was knocked against the wall.

The man took the child from the woman and walked away but the woman followed and managed the get the baby back.

The court heard that the later incident took place on June 12th last year when the defendant and the woman were in his home in Rush, north Dublin and began arguing over who would go to the shop to get milk for the baby.

The man, who had taken tablets, began hitting the woman with his closed fists and dragging her back when she tried to get away from him by leaving the house.

A telephone company technician who was working next door heard screaming and knocked on the door. When the accused answered the door the woman escaped and the technician walked off.

The accused then picked up a metal bar and threatened the technician. The woman later told gardaí­ that she was afraid for her life in the house and that after she escaped, she feared for her baby’s safety.

Gardaí arrived and tried to talk the accused man down but the man repeatedly refused to come out or to hand over the baby. He put the child up to a window when gardaí asked to see if the child was safe but later when gardaí­ began smashing in the front door the man held the child to the back of the door.

Judge Martin Nolan said he was satisfied that the man never intended to harm the child but that he behaved with recklessness in relation to her. He said that his actions were nonetheless “pretty inexcusable”.

He said he beat his former partner on two occasions and “he beat her quite badly”. He noted that the accused has pleaded guilty, is genuinely remorseful and comes from a good family who have a place for him when he emerges from prison.

He sentenced him to two years imprisonment, which he backdated to the date he first went into custody following his arrest in June 2020.

A garda witness agreed with James Dwyer SC, defending, that his client had been in an on-and-off relationship with the victim for five years.

Counsel handed in a letter to the court from his client which he said his client sets out a “deep expression of remorse”. He said his client has written that he wants to be there for “the big steps in his daughter’s life”.

He said his client has done “very, very bad things”, but hopefully he can “wake up” and be a proper member of the community.