Life sentence for murder of man with stab wound to chest 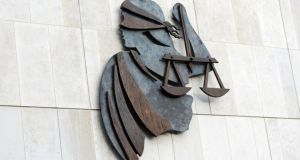 Tadhg Butler, with an address at Seafield in Tramore, Co Waterford was charged with murdering Michael O’Dwyer (25) on January 10th, 2014. Butler, also known as Thomas O’Grady and originally from Kilkenny, pleaded not guilty to murder, but after deliberating for 2hrs 26mins a jury of four men and eight women brought in a unanimous verdict of guilty. File photograph: Frank Miller/The Irish Times

A 34-year-old Kilkenny man has been handed down a life sentence after being found guilty of murdering a 25-year-old man with a single stab wound to the chest in Waterford last year.

Tadhg Butler, with an address at Seafield in Tramore, Co Waterford was charged with murdering Michael O’Dwyer (25) at that address on January 10th, 2014.

Butler, also known as Thomas O’Grady and originally from Kilkenny, pleaded not guilty to murdering his fellow Kilkenny native, but after deliberating for 2hrs 26mins a jury of four men and eight women brought in a unanimous verdict of guilty.

Butler dismissed his legal team on Tuesday last, a week into the trial.

He then recalled his nephew, who was a witness in the trial, for cross-examination in what Mr Justice Patrick McCarthy described as an “exceptional situation”.

Mr Justice McCarthy backdated the murderer’s sentence to January 9th, 2014, the date Butler has been in custody since.

The judge told the 12 jury members they were exempt from jury service for 10 years, if they wished.

The deceased’s aunt, Edel O’Neill on Friday read out a victim impact statement in which she said the hardest thing the family ever had to do was tell her 83-year-old mother on the morning of January 10th, 2014, that her grandson had been killed in such a brutal and violent manner.

Michael’s “senseless death” was something they would never be able to understand or come to terms with.

The court heard all they could think of was Michael lying on the footpath, on what was a cold night, terrified, with none of his loved ones to hold him.

In the early hours of January 10th, 2014, they were the family who got a dreaded knock on the door that changed their lives forever.

“Our life as we knew it can never be the same again. It was especially hard when we heard that Michael’s life had been taken by another person,” read Ms O’Neill.

The court heard how Mr O’Dwyer’s father had been diagnosed with cancer in 2009, and how he fought it for two years until his death in June 2011.

“Michael was very good to help and look after his dad during the illness. He would often lie in bed with him, playing music and chatting with his dad.

“Michael had some hard struggles of his own to deal with but he always cared for other people,” she read.

His aunt told the court Mr O’Dwyer was a very inoffensive young man and his mother Geraldine still waits for his phone call to tell her he is on the way home.

“His bedroom has never been touched since that awful night. Geraldine wants it left untouched as she wants to keep the scent of Michael because, apart from her memories and photos, it is all she has left of Michael,” read Ms O’Neill.

The jury heard the dead man and his four brothers were very close - they were not just brothers but “very close friends”.

The court heard that before he died, Mr O’Dwyer’s mother dropped him to Kilkenny and he said to her he might find a woman to settle down with.

“This of course will never happen now. Little did Geraldine know that it would be the last time for her to see her son, her baby, alive,” read his aunt.

“It was hard enough for us to lose Eddie, Michael’s dad, but to have to turn around and bury Michael beside him, a mere two and a half years later, was totally unbearable,” concluded Ms O’Neill.