Friends had four or five pints each at Dunboyne celebration before getting into car, court heard 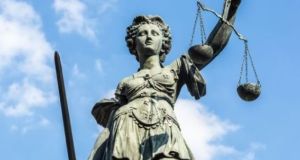 A young drunk driver who caused a crash which claimed the life of his best friend in Co Meath has been jailed for three years.

Mr Dunne was a front seat passenger in a car driven by Walsh which failed to take a sharp bend and crashed into a pillar beside the entrance to the defendant’s home in the early hours of that day.

Eamon Gilligan, a second passenger in the car, told a previous hearing the three friends had earlier been out celebrating in Dunboyne where they had four or five pints each.

Trim Circuit Court heard the defendant rang 999 following the crash and performed CPR on his friend until the emergency services arrived.

A garda told the court the defendant who was a learner driver had failed a breath test at the scene.

The defendant was found to have been 10 times over the limit for a novice driver and a medical report concluded his driving ability would have been impaired by the level of alcohol in his system.

A later technical examination found no sign of any defects with the car before the crash but the road at the time had been wet and muddy.

In a victim impact statement to the previous hearing the dead man’s father Maurice Dunne said his family’s pain was still as strong as it was when they heard about the crash and he appealed to young drivers to think twice before they take control of a car.

A defence barrister said his client wished to express his remorse for what had happened.

Judge Martina Baxter described it as a heartbreaking case where one friend was dead and another faced prison and would have to live with the tragedy for the rest of his life.

The judge said while she accepted the defendant’s remorse was genuine he had displayed the arrogance of youth when he drank a substantial amount of alcohol and placed the lives of everyone else in the car at risk.

Judge Baxter imposed a sentence of three and a half years backdated to March 1st, with the final six months suspended.

The judge also imposed a 10 year driving ban on Walsh.