Jobstown protesters call for public inquiry as charges are dropped 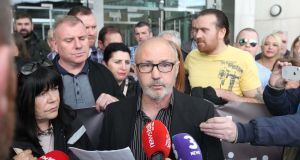 Anti-water charges protester Peter Herbert pictured outside Dublin Circuit Criminal Court after charges were dropped against him and other defendants in relation to the 2014 Jobstown protest. Photograph: Collins Courts

Supporters of the Jobstown protesters broke into chants of “Jobstown innocent, Labour guilty” in Court 19 on Monday afternoon as the State withdrew most charges against the anti-water charge activists.

The supporters also chanted calls for a public inquiry into the previous trial which saw six protesters, including Solidarity TD Paul Murphy, acquitted of falsely imprisoning then tánaiste Joan Burton and her advisor Karen O’Connell during the anti-water charges protest in Jobstown, south Dublin on November 15th 2014.

Supporters also called for the verdict against a teenaged protester who was found guilty in the Children’s Court to be overturned.

The youth - aged 15 at the time of the protest - was discharged by Judge John King conditionally in October 2016 on good behaviour for nine months so he would not have a criminal record. The ruling, the only guilty verdict returned in relation to the protest, is being appealed.

Outside the Criminal Courts of Justice building in Dublin one of the protesters Peter Herbert, speaking on behalf of the protesters, said they would continue demands for a public inquiry into the trial.

One supporter sounded an air horn in the Dublin Circuit Criminal Court after Judge Melanie Greally formally discharged all but one of the remaining Jobstown accused. The remaining accused, Dylan Collins, still faces a single charge of criminal damage.

Sean Gillane SC, prosecuting, said the case against Mr Collins (22) of Bawnlea Green, Tallaght is proceeding, but a trial date will probably not be required. Instead, he will be arraigned on November 20th.

In relation to the remaining ten accused, Mr Gillane told the court the Director of Public Prosecutions (DPP) had requested a “nolle prosequi” be entered in respect of all of the charges against the remaining accused, meaning that the charges were withdrawn.

Six of the accused had been due to go on trial on Monday, while the remaining five were due to face trial next year.

Carol Purcell (58), Declan Kane (49), Glen Carney (22), Keith Preston (38), Thomas Kelly (35), Paul Kiernan (39) and Peter Herbert (66) had been charged with falsely imprisoning Ms Burton and Ms O’Connell by restricting their personal liberty without their consent at Fortunestown Road, Jobstown, Tallaght on November 15th 2014, along with violent disorder on the same date.

Adam Lyons (22) had been charged with falsely imprisoning Ms Burton and Ms O’Connell along with one count of violent disorder and one count of criminal damage to a garda car windscreen on the same date.

Last June, six men were found not guilty by a jury of falsely imprisoning the women following a nine-week trial. Charges against a seventh man, Ken Purcell, were dropped halfway through the trial.

Ms Burton and Ms O’Connell had left a graduation ceremony at An Cosan Education Centre at Jobstown, south Dublin on November 15th 2014 when protesters surrounded their car, delaying them for three hours.