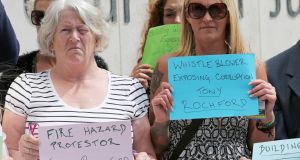 A man who caused over half a million euro in damage and loss of earnings to the eFlow toll collection system on the M50 has been jailed for two and a half years.

Tony Rochford (50) climbed up on the gantry spanning the M50 where he cut wires and smashed sensors, putting the toll collection system out of action for 26 hours and closing the motorway northbound for three hours last June.

Dublin Circuit Criminal Court heard he was motivated by a hope to attract media attention to his concerns about the role of construction failures in a fire at a Blanchardstown apartment complex in which two people died.

This offending occurred two days after the Grenfell Towers disaster in which more than 70 people lost their lives. Earlier Rochford had tried to make a statement about his concerns in relation to the 2002 fire at the Verdemont Apartments but felt he was getting “the run around” from gardaí.

Rochford admitted he had snipped wires, smashed sensors and damaged fuses after climbing the gantry. He had posted videos to Facebook and Twitter outlining the reasons for his actions.

Garda Gemma Collins climbed the gantry over the motorway to talk Rochford into coming down.

He has two previous convictions for public order matters which arose in relation to his belief that there were public health concerns about the installation of a certain type of water meter.

Judge Martin Nolan said that Rochford had been motivated to climb the gantry to highlight his frustrations and call attention to his complaints in relation to the Verdemont fire. He noted Rochford seems to be a very committed person and many people had good things to say about him.

Judge Nolan took into account the mitigating circumstances, Rochford’s motivation and personal circumstances and imposed a two and a half year custodial sentence.

Sergeant Robert Griffin told Karl Finnegan BL, prosecuting, that a staff member noticed a fault with the toll system and had gone to the toll bridge to investigate. He saw Rochford sitting on the gantry over the road with his legs dangling out of an open door.

Rochford told the man if he opened the gate to the ladder up to the gantry he would jump. Gardaí were alerted and Garda Gemma Collins spoke to Rochford in an attempt to defuse the situation.

Rochford agreed to allow her to come up to the gantry and told her to be cautious as he had cut some wires in the area. He told her he was “at his wits end” and “all other methods had failed.”

He produced some documents in relation to a fatal fire at the Verdemont Apartments in which two people had died in 2002 and gave them to Garda Collins to read. He was agitated as he felt the deaths were as a result of construction failures and that there had been a “cover up.”

Rochford admitted he had snipped wires, smashed sensors and damaged fuses on the gantry.

He said he believed that rendering the toll sensors inoperable would attract media attention and discussed dumping bird seed in the Dublin Port Tunnel if this did not work.

Eventually Garda Collins convinced Rochford to come down from the gantry and he was arrested. He co-operated fully with gardaí and said he had also hoped to get over to the south side of the gantry.

The loss of earnings as a result of the system being down for 26 hours was estimated at €162,807.

Further losses of earnings in the form of a correct handling rate was estimated at €40,000 and repairing damage to the equipment cost €416,000. The total estimated loss was €619,000.

Sgt Griffin told the court that it had become clear during the incident and interview process that Rochford was a man with a sincerely held grievance. He agreed that Rochford did not intend to put any gardaí at risk and any threats had been to his own physical integrity.

He agreed that during interview Rochford had outlined that he had recently come into possession of a file of what had happened in the Coroners Court in relation to the 2002 Verdemont fire and was particularly concerned about evidence that had been given to the jury.

Sgt Griffin agreed with Ms Lacey that this offence was “some kind of act of desperation to attract media attention to a cause he was passionate about.”

Ms Lacey said Rochford had set up a tiling company in 1997 and in the course of that had worked at the Verdemount Apartments observing the situation on the ground first hand.

She said he was a passionate, complex man who believed that people had been exposed to risk as a result of bad workmanship and inadequate building regulation and inspections.

Ms Lacey said Rochford’s life had not been without tragedy and he had problems with alcohol in the past but, apart from a recent slip, was now alcohol-free.

Counsel said his mother had been a postmistress and he had witnessed two robberies during his childhood. He had gone to London as a young man where he also witnessed a violent incident.

Ms Lacey said as a result Rochford had decided never again to stand by and let things happen. She said he had adopted the cause of certain people that he believed he could help.

She said Rochford had outlined to gardaí that he had gone down many legitimate routes, such as approaching politicians, and had gone to the gardai to have his statement taken but felt he was “getting the run around.”

Ms Lacey said Rochford had felt he was not being listened to and was frustrated. She handed in letters from Rochford’s former wife and from the mother of one of the victims of the fatal fire in Blanchardstown, who described Rochford as “a voice for those who can not speak.”

Counsel said Rochford was an accomplished sportsman and did voluntary work in his community. “He is willing to give of himself and his time,” said Ms Lacey.

She asked the court to take into account his early guilty plea and treat him leniently as possible.