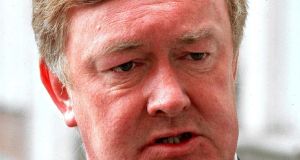 Former Minister for Justice John O’Donoghue had suffered great shame and embarrassment because of the publication, it was claimed. File photograph: David Sleator

Defamation proceedings are being brought by former minister for justice and Ceann Comhairle, John O’Donoghue, against the Tralee based newspaper Kerry’s Eye over articles published in 2018 alleging he had been forced from political office because of lavish expenses, the Circuit Civil Court in Killarney has been told.

Mr O’Donoghue had suffered great shame and embarrassment because of the article in the widely read newspaper, strongly wanted to defend his name, was “vehemently” pursuing the matter, and had sent a solicitor’s letter in November 2018 within three weeks of the article being published, the court was told on Tuesday.

Mr O’Donoghue was seeking an order to join Kenno Ltd, the publishing company of Kerry’s Eye Ltd, to the proceedings. Both have addresses at Ashe Street, Tralee.

A related application sought an order “if necessary” extending any time limits under Section 38 of the Defamation Act 2009.

The proceedings were past the one year time limit, the court heard, but within the two year limit for a court application to be made to extend the time for an action.

Richard Liston, barrister for the newspaper, told the court the applications were being” resisted.”

Katie O’Connell, barrister for Mr O’Donoghue, said by way of background, the “former minister and politician” was taking proceedings over an article published on October 18th 2018 in the Kerry’s Eye entitled “The Bull is Back”.

There were three articles within the one edition of the paper and they stated Mr O’Donoghue was forced to resign political office over lavish expenses, it was claimed. The barrister said the articles alleged gifts were given to Mr O’Donoghue’s wife and staff paid for out of public expenditure; that he had regularly attended horse races including to Australia and had stayed in a Paris Hotel; and that he had spent €20,000 “at nine different race meetings internationally over the four years 2003-2007” and had engaged in private travel at the public’s expense.

On November 8th, 2018 Mr O’Donoghue’s solicitor wrote to the editor of Kerry’s Eye .

On November 21st he received a detailed response from Padraig Kennelly on headed Kerry’s Eye notepaper.

Mr Kennelly in his reply went into “significant detail” including how the reporter made a number of attempts to contact Mr O’Donoghue, Ms O’Connell said.

In March 2020 solicitors for Kerry’s Eye Ltd highlighted to Mr O’Donoghue’s legal team that Kenno Ltd was the publisher of the Kerry’s Eye newspaper, she said.

Kerry’s Eye Ltd’s principal activity was the retail sale of books, newspapers and stationery, she said.

“The first time my solicitor became aware of Kenno Ltd was March 2020 and he immediately issued this motion,” Ms O’Connell said, of the application for an order to join Kenno Ltd in the proceedings.

Mr O’Donoghue who lived at Garranearagh, Caherciveen, had “vehemently” pursued the matter from the outset and had within three weeks written to the editor of Kerry’s Eye.

Mr Kennelly of Kerry’s Eye Ltd was also the director of Kenno Ltd, she added.

Mr Liston on behalf of Kerry’s Eye and Kenno Ltd referred in detail to case law. He also said that it was incumbent on the plaintiff “to ascertain who the publisher was” and to do so in time.

Judge Helen Boyle said she wished to consider affidavits as well as the law in the matter and has reserved her decision to Tuesday next, June 30th.