Hillwalker (59) seeking €60,000 damages from NPWS after cutting her knee on hike 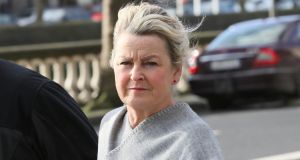 Teresa Wall of Rathingle Cottages, Swords is suing the Irish National Parks and Wildlife Service (NPWS) for €60,000 in damages following a fall on the Wicklow Way. Photograph: Courts Collins

A Co Dublin woman who has climbed in the Himalayas and been to base camp on Mount Everest is suing the Irish National Parks and Wildlife Service (NPWS) for €60,000 in damages following a fall on the Wicklow Way.

Hill walker Teresa Wall (59) of Rathingle Cottages, Swords, said in the Circuit Civil Court that as the result of a laceration to her right knee she can no longer climb or run marathons.

The woman, who weekly ran a half-marathon as a hobby, told her barrister Peter McParland that she received seven stitches after falling on a board-walk in the Wicklow Mountains National Park.

She said her foot snagged in a hole in one of a number of old railway sleepers that made up an EU ground conservation boardwalk just below the JB Malone memorial on the Sally Gap to Djouce trail.

The court heard that although there had been hundreds of falls over the years in the country’s national parks this was the first in which the NPWS had been sued for negligence and breach of duty.

Mr McParland said the wooden walkway constituted “a structure” and the Occupiers Liability Act imposed a much higher duty of care in the maintenance and management of it.

Kevin D’Arcy, counsel for the State Claims Agency, said Ms Wall had voluntarily participated in a unique rugged sporting activity of known reasonable risks and the NPWS was entitled to rely on the doctrine of volente non fit injuria.

Mr D’Arcy said the defendant denied negligence or breach of duty and, in the event of a finding against it, pleaded contributory negligence on the part of Ms Wall.

Ms Wall said she had been hill walking for 40 years and had walked “all around the world” with her husband. On August 6th 2013 they were coming down the mountain after a 20-mile-plus walk when they “obeyed the laws of the mountain” by following a sign which directed hikers onto the boardwalk.

She said she fell forward and lacerated her knee on a rusty nail. Her husband helped her off the mountain and brought her to the VHI Swiftcare Clinic in Swords where she received a tetanus injection and seven stitches.

Ms Wall said the boardwalk was in a disgraceful state. Since the fall, she said she has been inhibited in her work and social enjoyment of life.

Forensic engineer Pat Culleton said a single sleeper had rotted away at the point where steel cleats had once attached the rail line to it. He said walkers were deliberately steered on to the boardwalks.

Enda Mullan, District Conservation Officer for the park, said that in 20 years she had never had a complaint relating to a any fall on the Wicklow Way.

Two outdoor recreation consultants who walked the mountain path on two occasions each said it was for purpose.

Paul Romeril, forensic engineer for the defence, said there was a 100mm wide hole on the sleeper but he did not accept it created a hazard.

Cormac McDonnell, National Trails Office Manager for Sport Ireland said he had recently walked the boardwalks and had found them “extremely robust, durable and fit for purpose”.

Wesley Atkinson, regional manager with the NPWS, told Mr D’Arcy he was a trained mountaineer and international hill walker. There was an annual footfall of 30,000 on the Wicklow Way and it was planned from May to begin replacing railway sleepers on boardwalks with pressure treated timber.

He said the work would be expensive as some of the new timbers would have to be flown in by helicopter and the old sleepers removed by air. Railway sleepers had a finite shelf life and it was expected the new timbers could be used for 30 years or more.