Donegal man claims he died twice after being stabbed 17 times 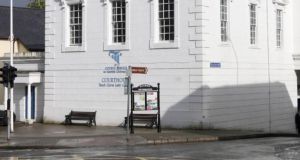 A man has said he died twice on the operating table after being stabbed 17 times in a knife attack.

Kristian Shortt told Letterkenny Circuit Court on Tuesday how he was stabbed multiple times in the head, neck, back, chest and hands by a man he had been out socialising with.

He was giving evidence against Kenneth Broe who appeared before a special sitting of the court in Co Donegal.

The Dublin businessman, who is a part-owner in a gym, is charged with assault causing serious harm and assault causing harm to Mr Shortt in Letterkenny on October 9th, 2008.

The court heard how both men had been out drinking in local bars before calling to a friend’s apartment on Letterkenny’s Main Street.

Mr Shortt (now aged 36), claimed that himself and Broe and the apartment owner Damien O’Connor began having a few drinks.

Shortt claimed Broe, of Alderwood Green in Tallaght, Dublin, had some lines of cocaine.

An argument started between Broe (now aged 44), and Shortt, with the son of publican Frank Shortt – who was awarded more than €4 million after being wrongly accused of selling drugs at his premises in 1995 – claiming he was attacked with a knife by Mr Broe.

“I just remember getting a knife into the chest and being rammed up against the wall,” he told the court. “It all happened so fast. I got stabbed 17 times in literally a few seconds. He was using all his power to take me out, he was sticking it into me.”

“I was just thinking, ‘Jesus, what’s happening’, but he just kept coming at me. When I went down my breathing system was taken out and I could barely breath and my mouth was full of blood. I couldn’t hold my balance, and when I went down I just got more blows to the face and head.”

Mr Shortt was taken to Letterkenny General Hospital and then to St Vincent’s Hospital in Dublin where he spent two weeks in intensive care. He said he was told later he died twice on the operating table.

The court heard a Garda investigation identified Mr Broe as a suspect, but he had left Letterkenny in a taxi headed for Dublin. He was arrested in Co Monaghan.