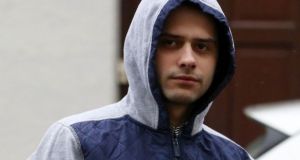 A 21-year-old student, whom a judge described as “a dangerous young man who continues to pose a risk of serious harm to the public”, has been sentenced to seven years in prison with the final two years suspended for stalking a fellow student and attacking her friend with a hammer.

The conduct of Igor Lewandowski, from Monasterevin, Co Kildare, was described as “sinister” by the probation service and his expressions of remorse “shallow” by medical experts.

Lewandowski was a second year electronic engineering student at NUI Galway when he became obsessed with 20-year-old Eve McDowell, and began stalking and harassing her incessantly over a 17-day period last May.

He drastically changed his appearance – by shaving off his hair, eyebrows and beard – when her friends pointed out to him during one stalking episode that he was easily recognisable.

He was arrested shortly after breaking into her apartment and assaulting her flatmate with a hammer early one morning and has remained in custody since.

Lewandowski pleaded guilty last November at Galway Circuit Criminal Court to harassing Ms McDowall at her student accommodation at Dun na Coiribe, Headford Road, Galway, and also at various other locations around Galway city on dates between May 10 and May 27, 2019. He also pleaded guilty to a charge of aggravated burglary by breaking into her apartment at Dun na Coiribe on May 27 last year, while having a claw hammer with him which he used to assault her flatmate Alison Buicke, causing her harm.

The accused had moved from Poland to Monasterevin with his family ten years ago and secured 565 points in his Leaving Cert.

In her victim impact statement read to the court last November, Ms McDowell said she feared for her life if Lewandowski was released from custody. She said the court process had been very long but she encouraged others who may be victims of stalking to come forward and make a complaint to gardaí.

She expressed relief on Thursday that the process had come to an end and that the defendant had been sent to prison.

Passing sentence Judge Rory McCabe said the probation service had described Lewandowski’s conduct as sinister, and that it had crossed “a number of moral and social boundaries.”

“They note clear indicators of a continued risk of serious harm to the public,” he said.

The judge noted Lewandowski was not suffering from any serious mental disorder, having been assessed by two psychologists and a forensic psychiatrist. They had concurred the accused displayed a lack of genuine empathy for his victims and that his expression of remorse was shallow and self-serving as he was anxious about the sentence he would receive.

“His conduct and attitude has shown him to be a dangerous young man,” Judge McCabe said.