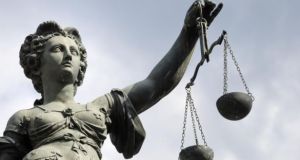 A schoolboy has failed in his personal injury action against Ennis Educate Together. Photograph: Getty Images

A schoolboy has failed in his personal injury action where he claimed his primary school was negligent in supplying him with a deflated football that caused him to break his wrist during a soccer match.

Suing through his mother, he claimed that kicking the deflated ball during a soccer match with classmates at break-time on March 14th, 2017, caused him to fall.

The teenager, of Sandfield Hall, Ennis, said he broke his wrist on the tarmac when trying to break his fall.

He was aged 12 at the time and he told the court: “I was falling backwards. If I fell on my head, God knows what would have happened, I probably wouldn’t be sitting here today. My instinct told me to put out my left hand.”

He said the football was between 60 per cent and 70 per cent deflated.

In the case, the school put forward evidence that the teenager didn’t kick the ball at all and that his version of the accident was “impossible”. The school had a similar ball in court for Judge Keys to inspect.

Judge Keys said if the case was to succeed “I think you have to stop playing football altogether in schools”.

The boy’s legal team employed a consulting engineer as part of his case and the school had to employ its own engineer in its defence who argued that the ball could not have been deflated at the time.

Judge Keys said even if he held with the teenager that the accident occurred in the manner described, “I see no grounds for holding the school responsible full stop”.

He said: “The schoolboy lost his balance and when he put his hand out to try to save himself from falling, he broke his wrist. I am afraid that is an accident, these things happen.”

Judge Keys added: “I think this is a case that can’t succeed under any circumstances – and I have no option but to dismiss it.”

The judge said he would award costs against the plaintiff.

“This is a case where a message has to go out from the courts where some actions are brought there is a risk of costs being awarded against you.”

Judge Keys added: “I am not saying that the plaintiff misled the court in any way or anything like that. It was his perception of what happened.”

A special needs assistant at the school, Marian Moroney, told the court that she was 10ft from the accident and that Julius Kroka never made contact with the ball.

“He went to kick the ball but never connected with the ball and fell over,” Ms Moroney told the court.

Ms Moroney said there was no problem with the ball and it was used for another game the following day.

When this evidence was put to the teenager, he replied: “That didn’t happen.”

Consulting engineer for Ennis Educate Together Tom Hayes told the court: “Even kicking a very deflated ball, it doesn’t catch the foot based on my testing.

“You are more likely to fall on a fully inflated ball because it is like a marble rather than a partially deflated ball.”

Judge Keys put a stay on the costs order and it would be lifted in the event of an appeal to the High Court.