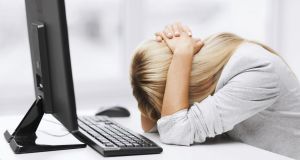 The Courts Service chief executive has said the organisation is facing two more years of ‘scraping around looking for money’ to try and prevent their IT system from collapsing. File photograph: Getty Images/iStockphoto

The head of the Courts Service has said the organisation is facing two more years of “scraping around looking for money” to try and prevent their outdated and unsupported IT system from collapsing.

Chief executive Brendan Ryan said the issue was his greatest concern and that he feared an error will occur that will impede the work of the courts.

The organisation’s ICT systems have been under-funded by about €2 million a year for the last five years.

Basic maintenance has been financed by the capital building programme budget, which has had knock-on effects for building projects, including several for dilapidated courts.

“[The systems] are not being kept up to date. We are still working off Windows XP,” Mr Ryan told the Oireachtas Justice Committee on Wednesday.

“I think Windows has gone forward about five or six iterations since then and that is what we are still working off because we can’t basically afford to upgrade.

“[Windows XP is] not being [technically] supported anymore.”

He said Sean Quigley, the head of accounting, is still using a system that is about “three generations behind” its current model and which is also no longer supported.

In 2008 the Courts Service IT budget was €9.7 million, but this has been reduced to €4.8 million for the last five years which, Mr Ryan said, “doesn’t keep our system ticking over”.

A minimum of €6.5 million is required just to maintain it and a funding request of an additional €2 million in the recent budget was not granted.

“For the last several years we have been using [capital building programme] money to support our IT system, and that cannot continue because we haven’t maintained our court venues for the last five or six years,” Mr Ryan told the committee.

This had consequences, he said, noting that the roof at Naas courthouse needed to be replaced next year at a cost of €300,000, which the Courts Service has not budgeted for.

“It’s 2017 again before [the funding issue] is reviewed so we have two years of again scraping around looking for money to make sure the whole system doesn’t collapse.

“It would be my main concern at the moment as chief executive of the Courts Service.”

“Using out of date and unsupported platforms can pose a security risk because Microsoft no longer provides security updates,” he said.

“There would be a lot more vulnerability that could be exploited.

“Using old platforms means there are a lot more security weaknesses than modern platforms, which means that [they] could be more easily exposed to viruses or compromise.”

However, he also said: “It’s like saying your house has an old lock that is easily broken. It doesn’t mean you are going to be immediately burgled.”

The Courts Service moved to alleviate any concerns that the IT issues were a security threat, saying the resulting problems were of an administrative nature only.

“Any monies we have had at our disposal in the years of the recession have been used to maintain the integrity and security of our main internal information systems,” a spokesman said.

“There is no issue of lack of investment in these, or in security solutions and products.”

The problem, he said, “purely relates to our productivity tools being very dated.

“The lack of money to invest over a number of years is impeding our ability to communicate and work in an efficient and speedy fashion.”