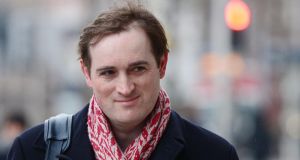 Cllr Richard Humphreys (Lab) says closure of the court would have a “devastating impact” on the local solicitor firms. Photograph: Alan Betson / THE IRISH TIMES

Councillors in Dún Laoghaire are calling for a united front to stop controversial plans for the closure of their local courthouse by the end of the year.

The Courts Service has published proposals to close four courts in Dublin including at Dún Laoghaire, Tallaght, Swords and Balbriggan in an overhaul of Dublin’s District Courts. A number of Dún Laoghaire-Rathdown County Council members will call for the local authority to unite in a bid to stop the closure of the Dún Laoghaire courthouse at their council meeting tonight.

Cllr Richard Humphreys (Lab), who is also a senior counsel, said the consultation for submissions regarding the court service changes had been extended to September 5th.

He said five of the councillors, who are practising lawyers, had come together across party lines from Fianna Fáil, Fine Gael and Labour to issue a call to save the courthouse.

Cllr Humphreys said the closure of the court, which operated five days a week, would have a “devastating impact” on the local solicitor firms.

“It will also have a severe and detrimental impact on the local economy. Many of the businesses such as restaurants, cafes, hotels and car parks rely on the spend of the court users. It is no secret how much retail in Dún Laoghaire has suffered in the last number of years. We do not accept that there will be any great saving or organisational efficiency for the Courts Service.”

Independent councillor Michael Merrigan said he also planned to speak at the meeting about the devastating effects: “It would downgrade our county town. We have to save it.”

“The closing down of regional court houses in towns like Dún Laoghaire, removes an essential pillar of our democracy from local communities.

“It’s a population exceeding that of the city of Limerick. ”

The proposed changes would centralise criminal business in the Criminal Courts of Justice complex near Phoenix Park and send all traffic cases to Blanchardstown.

The Courts Service acknowledged when it published the proposals the changes would “inevitably cause inconvenience” but said they would result in improved services in courtrooms equipped with facilities and support services not provided in suburbs.