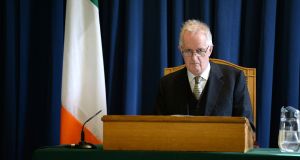 Mr Justice Peter Charleton said the “whole notion of conflicts of interest is something we perhaps take an exaggerated view of”. Photograph: Dara Mac Dónaill

Lawyers for Garda whistleblowers have expressed “deep concern” that the same legal team is to represent Garda Commissioner Nóirín O’Sullivan and former commissioner Martin Callinan before the Charleton Tribunal.

The tribunal is investigating allegations of a smear campaign against Garda whistleblower Sgt Maurice McCabe.

The tribunal heard applications for legal representation on Thursday during which it emerged that the same counsel is also to act for all members of the Garda, save where conflicts of interest emerge or they have independent representation.

Counsel for Sgt McCabe, Michael McDowell SC, said he was concerned about a category of persons being represented by the same legal team and that individuals might not be able to give specific instructions.

He might in time make a submission and ask the tribunal chairman, Mr Justice Peter Charleton, to rule on the matter, he said.

Mr McDowell said that as well as potential conflicts of interest he was also concerned about the process that was being established by the Garda, according to media reports, for assembling the evidence for the tribunal.

He said he would be putting in writing his “deep concern” about the matters.

Mr Justice Charleton said he would think about the issue. He said the “whole notion of conflicts of interest is something we perhaps take an exaggerated view of”.

John Ferry, who is to represent Garda whistleblower Superintendent David Taylor, said he may also make a representation about his concern about the same legal team representing the former and sitting Garda Commissioner.

An application for representation was made by Michael Hegarty solicitors on behalf of Sgt Yvonne Martin, Sgt Brigid McGowan, Insp Goretti Sheridan and Sgt David Durkan.

Conor Dignam SC sought representation on behalf of the former and sitting commissioners and serving and former members of An Garda.

Mr Justice Charleton is to give his ruling on the applications on Monday .

The chairman heard a number of applications for representation on behalf of media organisations.

Sean Gillan SC sought representation for RTÉ. One of the tribunal’s terms of reference concerns a broadcast in May 2016 and whether Ms O’Sullivan did, or tried to, influence it.

It is also to investigate whether the former or sitting commissioner directed that the media be briefed negatively about Sgt McCabe.

Following an application from Michael Kealy, for Associated Newspapers, Mr Justice Charleton said he was being asked to grant representation but journalists were not saying to him whether they had any relevant information .

Mr Justice Charleton said the question had still not been answered as to whether the journalists had any relevant information.

The chairman asked if journalists would say if they had been told anything that was designed to blacken Sgt McCabe’s name? Mr Kiely said answering that question might be “inappropriate” in the context of journalistic privilege.

Mark Dunne, for The Irish Times, said it was looking for limited representation. The chairman said he understood The Irish Times did not publish any reports damaging to Sgt McCabe but he had “no idea” if anyone had approached any of its journalists suggesting any “calumny” about him. Mr Dunne said perhaps the application was premature and he might reserve his position.

Kieran Kelly solicitor, for Independent News & Media, made an application on behalf of that organisation.