Charleton tribunal: social worker unaware of who McCabe was 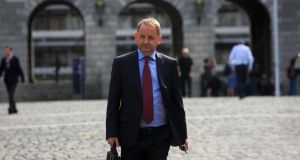 Social worker Laura Connolly told the Charleton tribunal she was not aware of who Sergeant Maurice McCabe was until she was contacted by the tribunal earlier this year. Photograph: Collins

The social worker who drafted a false child sex abuse report to the Garda about whistleblower Sergeant Maurice McCabe has said she was not asked about the matter until earlier this year, the Charleton Tribunal has heard.

Social worker Laura Connolly also said it was not until she was contacted by the tribunal earlier this year that she learned about Sgt McCabe’s national profile.

Ms Connolly told the tribunal chairman Justice Peter Charleton that she did not use social media and had no interest in the “negativity and drama” of the media.

Life brought its own “stressors”, she said. Asked by the chairman, she said she did know that Leo Varadkar was the Taoiseach and that there had recently been a tragic fire in London.

However, she said she had no interest in the Sgt McCabe case. She told the chairman there was a canteen in her workplace in Co Cavan and the staff took tea breaks but she had no memory of the mistake that was made with Sgt McCabe’s report being discussed in 2014, after it had come to light.

“The error in the Rian report was never brought to my attention,” Ms Connolly said. The mistake came about after Tusla was given false information about a child sex abuse allegation, by a counsellor with the Rian counselling agency, Laura Brophy, in August 2013.

In April 2014 Ms Connolly, in the course of her work, wrote up a Garda notification report based in part on the wrong information that had been supplied to Tusla.

She also had at her disposal a colleague’s note of a phone call from Ms Brophy, that contained the correct details of the allegation made by Ms D against Sgt McCabe.

Two weeks later the alleged victim, Ms D, contacted Ms Brophy after she had become aware that a report containing the inaccurate details of the alleged sexual abuse, had arrived in Bailieboro Garda station, where her father is a Garda. Ms Brophy, in turn, contacted Tusla.

However in the meantime, the tribunal heard, the report drafted by Ms Connolly should have come up for a discussion at a weekly referrals meeting, held every Monday. Questioned about this by Michael McDowell SC, for Sgt McCabe, she agreed it had not been discussed at the referrals meeting.

Asked if someone “could have pulled it off the agenda because they understood a mistake had been made,” Ms Connolly said it was possible. Mr McDowell said it was “wholly exceptional” that it had not been discussed at the meeting.

Ms Connolly said normally all new referrals were left in a bundle on a tray and brought to the weekly meetings. She said it wasn’t her decision that the referral was not on the agenda.

Ms Connolly then put this allegation into her notification report for the Garda, even though the Rian document referred to Ms Y by surname, and Ms D by first name and surname. Ms Connolly said there was “a level of similarity” between the two surnames. The tribunal heard that on May 14th, 2014, within ten minutes of learning of the mistake, Eileen Argue, of Tusla, sent an email to Gerard Lowry, also of Tusla, informing him of what had happened and saying “this information is in relation to M Mc C.”

Ms Connolly said she accepted Mr McDowell’s point that this appeared to indicate that both Ms Argue and Mr Lowry knew who the alleged perpetrator was.

When Mr McDowell put it to her that it was well-known to everyone, including the witness, who Sgt McCabe was, Ms Connolly said she remained adamant that Sgt McCabe was “not in any way significant to me” and that she did not treat the case in any way differently to any other.

Asked if in 2014 no-one had come to her and asked how the mistake had been made, she said this was the case. “You were left entirely out of the loop?” Yes, she said.

Ms Argue must have felt was appropriate for her to deal with the matter as she was her line manager, she said.

The tribunal has heard that the allegation made by Ms D against Sgt McCabe was investigated in 2006 and the Director of Public Prosecutions decided that charges should not be brought, and that the allegation, even if true, might not constitute an offence.

The tribunal is now hearing from Mr Lowry.