Ben Gilroy also forbidden from acting as legal adviser to others 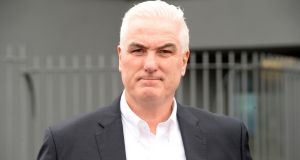 To date, Ben Gilroy has been a party to at least 16 High Court cases and has been held in contempt of court three times. Photograph: Dara Mac Dónaill / The Irish Times

The High Court has banned a prominent anti-eviction campaigner from taking further cases against a bank and from advising others before the courts due to his history of vexatious and frivolous litigation.

Ben Gilroy, who ran for the Dáil twice, is forbidden from taking cases or serving papers on AIB or its employees. He is also barred from AIB headquarters in Ballsbridge.

To do this the court has made use of a relatively obscure legal provision called an “Issac Wunder order” which allows a judge to forbid a serial and vexatious litigant from taking further cases without permission from the court.

The order is named after a man who, in the late 1960s, kept bringing and losing groundless cases against The Irish Hospitals Trust. Eventually the court ruled Wunder’s actions were “frivolous and vexatious” and banned him from taking further cases without the leave of the court.

Because an Issac Wunder order restricts the constitutional right of citizens to seek relief from the courts, they are rarely issued.

Earlier this month, Mr Justice Robert Haughton issued a ruling laying out why he felt such circumstances apply to Mr Gilroy.

The ruling arises from a case taken by AIB against Seamus McQuaid. AIB is attempting to recover a €3.35 million debt from Mr McQuaid.

The bank has alleged Mr Gilroy, as an adviser to Mr McQuaid, prevented it from recovering the debt by helping to move his assets into a “trust”.

“It is a feature of Mr Gilroy’s successive written and oral applications to the court that he repeatedly pursues the same arguments that have already failed, and are bound to fail again,” Mr Justice Haughton wrote.

Mr Justice Haughton lays out Mr Gilroy’s previous actions before the courts, including accusing another judge of being a member of a satanic cult and issuing veiled threats to a lawyer on the opposing side.

He also quotes at length Mr Gilroy’s affidavits to the court which are littered with often irrelevant Latin phrases (at one stage Mr Gilroy threatens to privately prosecute “hostis humani generis” – enemies of mankind) as well as quotes from Thomas Jefferson.

In one passage, Mr Gilroy accuses lawyers of being members of a “semi-secretive society normally wearing wigs or black cloaks and normally believing they have some superior position above all others not part of their society”.

The judge also quotes from Mr Gilroy’s anti-eviction online activism including a post reading: “We should all use the Defence of The Dwelling Act and just wait for anyone coming through the door and blow their head off with a gun, maybe that is the answer.”

Much of Mr Justice Haughton’s ire is directed towards Mr Gilroy’s treatment of the lawyers and staff of AIB, including one solicitor who went to the Garda and put in place security arrangements at her home following a letter from Mr Gilroy.

Mr Justice Haughton also banned Mr Gilroy from acting as a McKenzie Friend – the term for a non-legally qualified person who assists another in court.

Last year, the President of the High Court issued strict new guidelines on the role of McKenzie Friends, prompted in part by suspicions Mr Gilroy and others were receiving payment for giving dubious advice to litigants.

“I consider it probable that Mr Gilroy has, directly or indirectly, received payment, financial or in kind, in respect of his advice and services as a McKenzie Friend,” the judge wrote.

The judge said he was also “satisfied that by his conduct in and out of court, Mr Gilroy has shown that he is an entirely unsuitable person to act as a McKenzie Friend”.

It is the first time someone has been banned from being a McKenzie Friend since the guidelines were introduced.

Mr Gilroy, who didn’t return requests for comment yesterday, has indicated he intends to continue his legal activism.

In a recent submission to the court he said he planned to bring a legal challenge to stop the proposed Abortion Bill being signed into law.