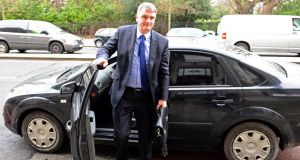 Garda Síochána Ombudsman Commission chairman Simon O’Brien arriving for a meeting with the Minister for Justice Alan Shatter at the Department of Justice this afternoon. Photograph: Eric Luke/The Irish Times

Martin Callinan has expressed “grave concern” that a statement by the Garda ombudsman implied that An Garda Síochana was “in some way suspected of complicity”.

The Garda Commissioner made the comment tonight, after a statement was released by the Garda Síochána Ombudsman Commission (GSOC) this evening regarding suspected bugging of its offices.

In the statement GSOC said three technical and electronic “anomalies” were found during an investigation. GSOC said the anomalies could not be explained but the organisation is “satisfied that its databases were not compromised”.

The ombudsman said it “regrets” taking the decision not to report the matter.

“There was no evidence of Garda misconduct,” it added.

Mr Callinan is seeking clarification from GSOC the “basis for the suspicion of Garda misconduct” and whether the gardaí need to investigate any matters identified. He also wants to know the “nature and extent of the anomalies” and whether a “criminal offence” is suspected.

Earlier today Minister for Justice Alan Shatter met GSOC chairman Simon O’Brien over alleged bugging of the offices.. The matter has now been reported to Mr Shatter, it said.

“We did not wish to point fingers unnecessarily and we did not believe that widespread reporting would be conducive to public confidence. We took the decision not to report in good faith,” it said.

It has been working to review security systems in the light of the investigation, it said. There was no evidence of Garda misconduct, it added.

Earlier today Taoiseach Enda Kenny expressed concern about the alleged bugging of the offices and the failure of the commission to inform the Minister for Justice.

Speaking at an event in Co Roscommon, Mr Kenny said, “I think it is very important that the details of what transpired here be made available to the Minister for public analysis and for reporting to cabinet tomorrow.”

Of fundamental importance, he suggested, was the need for an explanation by the GSOC in relation to why Mr Shatter was not informed as required under Section 80 subsection 5 of the Garda Síochána Act.

“I think it is very important that we should understand on what grounds suspicions were determined in the first instance, who determined those suspicions, and did the board discuss this and make arrangements for a company to assess whether or not interference in the communications was had,” Mr Kenny said.

He played down suggestions that only State agencies would have access to the type of equipment allegedly used to bug the office. “It is not unusual at many of the communications fairs internationally that this kind of equipment would be available, though it is expensive,” he said .

Earlier Tánaiste Eamon Gilmore described claims that the offices were bugged as “sinister” and “unacceptable”.

Speaking in Brussels this morning Mr Gilmore said: “ I understand that Minister Shatter is going to brief us at the Cabinet tomorrow on what is emerging.

“We are seeing a lot of stories now about telephone conversations and offices being bugged. I think we are going to have to deal with this. It’s unacceptable, it shouldn’t be happening but I’d like to see what Minister Shatter is going to tell us about it and what he knows about it.”

In a statement, the Irish Council for Civil Liberties has expressed “grave concern” about reports of spying which it described as “deeply troubling”.

Mr Kenny is to ask Mr Shatter to brief the Cabinet after the revelations emerged yesterday.

Minister for Education Ruairí Quinn said he was “surprised” to learn the Minister for Justice had not been told about the alleged bugging.

Speaking at an event in Dublin, he said: “I only learnt about it this morning like everybody else. I was surprised that they hadn’t, in fact, informed or briefed the Minister. I would get briefings on a regular basis about confidential matters on the basis that I should know.

“That would be the same with any senior person in any organisation. The fact that they are now going to give that meeting to the Minister for Justice Alan Shatter this afternoon is good. We’ll probably get a report from him tomorrow on it.”

The bugging discovery was made last year when the organisation carried out a sweep of its offices using a UK-based private contractor that specialises in counter surveillance. Since then, security has been improved in GSOC including the establishment of a dedicated meeting room that cannot be bugged.

The sweep of GSOC’s offices in Middle Abbey Street in Dublin’s north inner city found a speaker phone in a conference room where cases were discussed was bugged. There was no physical bugging device in the phone, though a check on the line revealed it had been electronically monitored in a way that enabled a third party to listen in to conversations being conducted in the room and on the phone in question. The UK security consultants that carried out the inspection on behalf of Gsoc also concluded that the office’s wi-fi system had been compromised from outside the building.

Mr Shatter was last night also coming under increased pressure from the Opposition to make a full statement. Fianna Fáil and Sinn Féin insisted he make a statement today, saying the development was so serious it could not wait any longer.

Sinn Féin’s spokesman on justice Pádraig Mac Lochlainn said while GSOC may have been targeted by “hackers”, any delay by the Government in bringing clarity to the case may lead to “unhelpful” speculation.

Fianna Fáil spokesman on justice Niall Collins said the matter was so serious Mr Shatter needed to immediately “explain what on earth is going on”.

Mr Shatter’s office issued a statement saying he was not in a position to comment fully. “Please be advised that Minister Shatter has sought a full report from GSOC on the matter and that he won’t be making any comment until the report has been received and considered,” the statement said.