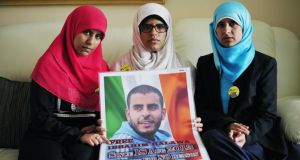 Omaima (left) Fatima and Somaia Halawa, sisters of Ibrahim Halawa (18), who is in prison in Egypt. Photograph: Aidan Crawley

Dún Laoghaire-Rathdown councillors have unanimously supported a motion calling for the immediate release on humanitarian grounds of Irish citizen Ibrahim Halawa from a prison in Egypt.

Cllr Michael Merrigan(Ind) put forward the motion last night regarding the 18-year-old, who has not been charged.

Cllr Victor Boyhan (Ind) said Mr Halawa had been locked in a prison cell in Cairo since August last year.

“He was arrested and detained by the military government in Egypt – to date no formal charges have been served on him,” he said. “The teenager is expected to appear before one of Egypt’s notorious mass trials on July 16th.”

Ibrahim is the son of Sheikh Hussein Halawa, Imam of the Islamic Cultural Centre of Ireland at Clonskeagh in Dublin.

Ibrahim was arrested with his sisters Soumaia (28), Fatima (23) and Omaima (21) during the clashes between supporters of Morsi and security forces last August .

Cllr Boyhan said that, before his arrest, Ibrahim was studying for his Leaving Certificate at Firhouse in Dublin.

“Nearly a year in prison without charge is against all international principles of justice and humanity. No book of evidence has been handed over to substantiate a charge,” he said.

Cllr Boyhan said the Irish Embassy in Egypt had, without success, pursued a request for Ibrahim to be allowed to contact his family by telephone.

Cllr Boyhan said the family had lived in Ireland for more than 20 years and it was important for the council to communicate their concerns to the Taoiseach and the Department of Foreign Affairs.