Bullet casing found on stage ahead of FG ardfheis 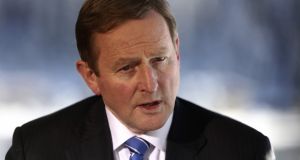 The auditorium where Taoiseach Enda Kenny was due to address the Fine Gael ardfheis was cleared briefly after a bullet cartridge was found on stage. Photograph: Simon Dawson/Bloomberg

The auditorium where Taoiseach Enda Kenny was due to address the Fine Gael ardfheis on Friday night was cleared briefly after a bullet cartridge was found on stage at the Citywest Hotel.

The cartridge was found on the stage at about lunchtime.

Few people were in the auditorium at the time the casing was discovered but they vacated the room temporarily while another security sweep was carried out.

Security has been increased at the venue in Saggart, southwest Dublin, in the wake of the find, with increased checks on delegates and visitors to the conference, taking place on Friday night and all day Saturday.

Asked by reporters about the security alert, Minister for Finance Michael Noonan said he had not heard about it.

However, he said: “I’ve been coming to Fine Gael ardfheiseanna since the 1970s.

“There are frequent security threats. We haven’t come across a real one yet.”