Bringing dark art of jury selection into the open

Jury members should not be dismissed without ‘a good and verifiable reason’, say reformers 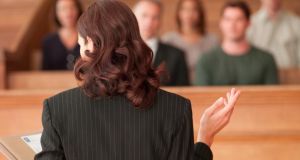 The UK has abolished peremptory challenging of potential jurors, so is it time we too adopted that model?

At the Central Criminal Court in Dublin earlier this year at a trial for sexual assault, the defence used all seven of its entitlements to challenge potential jurors. As each person stepped forward the defence team sized them up and either accepted or rejected them. They excluded as many women as they could and also rejected older men and those in shirts and ties.

The result was a jury made up of nine men and three women, with most of the men appearing to be of a similar age and background to the defendant. As it turned out, despite the challenges, the defendant was convicted. But the attempt by the defence team to influence the make-up of the jury raises questions about the challenge process.

Is it “patently unfair” and “discriminatory”? Is it a kind of unscientific “voodoo”, as at least one lawyer claims? Or is it an opportunity to give the accused a small “sense of ownership” of what’s happening to him or her?

In England and Wales, the right to “challenge without cause shown”, known as peremptory challenge, was abolished completely in 1988, in Scotland in 1995 and in 2007 in Northern Ireland. In the Law Reform Commission’s Report on Jury Service, published in April, it recommends the current law in the Juries Act 1976 should be retained.

The Act allows for seven peremptory challenges for each side, to be made before the potential juror swears the oath. Any number of challenges with cause shown can also be made, though the option is rarely used. It is the solicitor on either side who calls the challenge having usually worked out a strategy in advance with other members of the legal team. Lawyers are also entitled to see names and addresses of those in the jury pool as well as information on occupations if supplied.

Remy Farrell, a barrister who works in criminal trials, says peremptory challenges are useful, in particular for removing jurors who may not be capable of performing their duties.

“Very often a juror is about to be sworn in and it is clear they could be a couple of olives short of a pizza; you can’t filter out someone like that without being offensive. The challenge is a way of doing it.”

He argues it is not objectionable for a person on trial to be allowed to reject some jurors. If for example he were defending a client in a bank robbery case, we would not want the person who works in a bank on the jury or the one with the Financial Times under his arm. If he were prosecuting, he might not want the man with the dreadlocks and piercings who may not like the police.

He believes prosecution teams in the Central Criminal Court should use the challenge process more and should use it “tactically”, but he concedes there is no scientific basis for it.

“I think it’s all voodoo,” he says. “But it doesn’t do any harm and it does weed out really inappropriate people.”

Fellow barrister Sean Gillane believes challenges help to ensure a broad spectrum. What might appear to be an unbalanced jury is often a reflection of the limits of the pool itself. Challenges can also give the accused a sense of ownership, a small influence on what’s happening to him or her, he says.

He generally has a chat with his solicitor in advance to try to decide what they want in a jury. There is a fair bit of visual assessment; if his client has robbed a shop and a potential juror looks like a retailer, he will be rejected. If the case involves a child victim, a woman who looks like a mother will be turned away.

“Rejecting someone in a shirt and tie is very common. By the same token you often see prosecution looking to exclude people with tattoos or odd haircuts, but it is judging a book by its cover, there is no way of knowing.”

But John O’Keeffe, criminologist with City Colleges and Trinity College, Dublin, believes challenging a jury without cause is “patently unfair and not just a potential gross miscarriage of justice for the accused but for society as a whole”.

“Defence and prosecution teams will typically select a jury composed of those whom they feel will be most favourable to their client,” he says.

While it’s understood lawyers must act in the best interest of their client, this should not extend to “effectively determining the outcome to a case before evidence has even been adduced”.

“A jury should consist of a cross-section of society, not a group of men or women of a certain age whom either side believes will get the best result for their client,” he says.

Lawyers are making quasi-sociological and psychological decisions on who should decide their client’s case, Mr O’Keeffe says, areas they are “clearly unqualified to make any judgement on”.

“Regardless of their qualifications however, the notion that a potential jury member could simply be dismissed without reason because of their age, gender or appearance is not just discriminatory, it ensures that outcomes of cases are based not on facts, but on the contrived make up of any given jury.”

Selection fatigue
There is no question that juries can be skewed in favour of the defence, he says.

“Typically in sexual assault or rape cases, defence teams will opt for men, believing that women will be less sympathetic to their client. They should not be afforded this luxury.”

He believes prosecution teams don’t make sufficient use of the challenge process and are arguably suffering from “selection fatigue”. There is a view on all sides that the system “is as it is”.

But the UK model, abolishing peremptory challenges, should be introduced in Ireland, he says. Jurors should be challenged only if legal teams have “a good and verifiable reason” with the final decision always being in the hands of the trial judge.