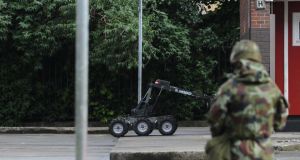 The year’s figures mark a steep decline from 2013, when 250 call-outs for the bomb disposal teams resulted in the neutralisation of 80 viable devices.

In terms of general statistics for the forces, there are currently 430 military personnel serving on peace support operations in 16 different locations, including Afghanistan, Kosovo and the Democratic Republic of Congo.

The largest troop deployment is in Lebanon, where 199 Irish personnel are now stationed, followed by the Golan Heights region, which is manned by 138 personnel working in conjunction with the United Nations Disengagement Observer Force.

Many of the air ambulance missions involved the transport of children in need of transplant operations to British hospitals. The 24-hour service also caters for incidents involving severe spinal injury, patients requiring specialised emergency treatment in the UK, and organ retrieval teams.

The combined air time for all air corps crafts was more than 10,000 hours in 2014, with some 5,500 missions completed over the course of the year.

The last 12 months proved no less hectic for the State’s navy vessels, which completed 912 boardings and made 10 detentions in relation to infringements of fishing regulations. Those searched included vessels from Ireland, Britain, Russia, and Mauritania, among others.

Navy personnel also orchestrated the capture of the Makayabella yacht off the Cork coast in September, resulting in an €80 million cocaine seizure.

The armed operation led to the arrest of four British nationals.

The navy courted controversy this year over the newest high-profile addition to its fleet in June, as members of the public protested against the naming of the LÉ Samuel Beckett following its grand unveiling.

At a cost of almost €50 million, the state-of-the-art warship was put through its paces with sister ships LÉ Aoife and LÉ Roisín at a public exhibition in Cork earlier this summer.

The specialist naval service dive team was called out to eight search and recovery operations this year following requests from the Coast Guard and An Garda Síochána. The team conducted 43 other operations involving “sub-surface explosive ordnance disposal” missions, berth clearances for visiting foreign warships and underwater maintenance for the Irish navy fleet.