Team found 80 viable devices, including one in Tallaght yesterday 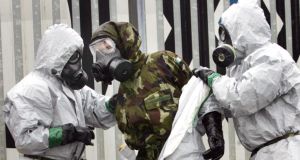 Army bomb disposal teams have been called out to deal with more explosive or suspect devices than ever this year, though the numbers found to be viable bombs dropped from the record figures of last year.

According to the Defence Forces, the bomb disposal teams have responded to 250 call-outs to date this year, the latest of which occurred yesterday when a suspect device was found in Tallaght, west Dublin.

Gardaí requested the assistance of the Army bomb disposal team after a suspect device was found in the porch of a house in the Bawnlee area.

Evacuated
The Army team arrived at 3.45pm and houses within a cordon erected by the Garda were evacuated. The device was removed to a nearby green area and made safe by a controlled explosion.

On inspection, it was found to be viable. The area was declared safe at 4.30pm and residents were allowed to return to their homes.

While the number of call- outs so far this year relating to viable devices dropped to 80 from the record 96 cases last year, the rate at which explosive devices are being found remains at levels not seen since the height of the Troubles.

In nine cases the devices had exploded and the Army’s personnel were required to carry out post-blast analysis in an effort to determine the type of device and explosive material used.

Most of the devices discovered are pipe bombs used by criminals against other underworld factions, usually to instill fear and to demonstrate to their targets they know where they live and can harm them at will.

Pressure
“In some cases when gangs are trying to collect money for drugs it is a way of making a threat to get that money, to put pressure on by bringing that threat to someone’s family,” said a Garda source.

Other sources said leaving a viable or hoax device outside a house or under a vehicle was a more discreet way of threatening a third party than using firearms, and was less likely to result in gardaí catching those involved.