Body of baby Karol Rozycki released to his family 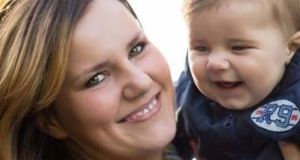 The body of an 11-month-old baby found dead in a bedroom in his apartment in Killarney on Sunday has been released to his family.

His death is at the centre of a continuing Garda investigation.

Baby Karol Rozycki’s father, who was found with serious injuries in the apartment, has been transferred to Cork University Hospital.

A postmortem on the baby was carried out on Monday. The results are not being released for operational reasons.

Coroner for South Kerry, Terence Casey, officially released the infant’s remains to his mother Anna Rozycka and her family and they were being taken in charge by the family on Wednesday evening.

The remains are to be taken on a flight to Poland on Friday, and the burial is to take place in his mother’s home town of Bielsko-Biala, near Krakow, on Saturday .

Ms Rozycka raised the alarm about her son after returning home from work at the Aghadoe Heights Hotel, one of Killarney’s top hotels, at about 6pm on Sunday.

Gardaí said the apartment remains sealed off and investigations are continuing.

Statements have been taken from a number of people and gardaí are also waiting to interview the injured man.

A special Mass for baby Karol and his family in Killarney’s St Mary’s Cathedral on Tuesday, celebrated in Polish and English, drew a large attendance from both the Polish and Irish communities.