Bellante remanded in custody over murder of Tom O’Gorman

Italian national, currently in Central Mental Hospital, did not appear at court hearing 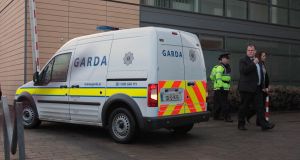 A man charged with the murder of 39-year-old Tom O’Gorman has been remanded in custody to the Central Mental Hospital after failing to appear at a scheduled court appearance this morning.

Saverio Bellante, a 34-year-old Italian national from Palermo in Sicily, but with an address at Beechpark Avenue, Castleknock, west Dublin, was initially brought before Blanchardstown District Court on Monday to face the murder charge.

He was remanded in custody to Cloverhill Prison, Clondalkin, Dublin, and was due to appear before the courts again today. However, since his last appearance he has been transferred to the Central Mental Hospital in Dundrum, south Dublin.

Judge Victor Blake at Cloverhill District Court heard that correspondence relating to the accused had been received from Dr Paul O’Connell at the Central Mental Hospital.

At this morning’s brief appearance, solicitor Michael Staines for Mr Bellante asked Judge Blake if he would warn the media they needed to be careful when reporting on the case.

Judge Blake told the court he would “endorse” those comments, though he did not issue any direct warning.

Mr Staines also made an application to the court for memos and video records of the interviews conducted with his client to date and applied for free legal aid.

Judge Blake said he preferred to have a statement of means before granting free legal aid and put that matter back to the next court appearance in a fortnight. However, he said if legal aid was granted it could be back dated to the current period.

Solicitor Rachel Joyce for the Director of Public Prosecutions said there was “no reality” to the possibility the Garda would have the full file on the case ready by the time the matter was heard again on Friday, January 31st. She requested the case be put in for mention on that date. Judge Blake agreed.

At Monday’s brief appearance, Judge David McHugh ordered Mr Bellante be given a medical assessment in Cloverhill. It emerged yesterday he had been transferred to the Central Mental Hospital for treatment.

Mr O’Gorman, a minister of the Eucharist who was involved in a number of Catholic groups and campaigns, was found dead at his home in Castleknock, west Dublin, at about 2am on Sunday.

He was pronounced dead at the scene at Beechpark Avenue. State Pathologist Professor Marie Cassidy later carried out a postmortem.

Mr Bellante was arrested at the scene under section 4 of the Criminal Justice Act.

When cautioned at the Garda station, Mr Bellante replied: “I am guilty”, Det Sgt Traynor told the court on Monday.