Belfast rape trial told Rory Harrison is ‘not a weasel’

Rory Harrison’s counsel says he is ‘kind, honest and modest’ 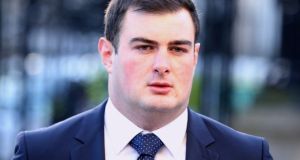 Rory Harrison, who is accused of covering up the rape of a woman by two Ireland and Ulster rugby players, is “kind, honest and modest” and “not a weasel”, a jury has been told.

Stuart Olding is accused of orally raping the then 19-year-old Belfast student at the same time his teammate Paddy Jackson allegedly vaginally raped and sexually assaulted her.

Mr Harrison is accused of helping to cover up the alleged rape by misleading police and deleting relevant text messages.

Counsel began his address by reminding the jury it must grant the accused the benefit of the doubt and the presumption of innocence.

Mr Duffy told the jury it does not have the power to change its mind in a few months. “You can’t ring up the Courts Service later and say ‘I’m worried I might have got the decision wrong.’

“The registrar will tell you, I’m sure very politely, I’m sorry there’s nothing that can be done.”

He said a lot of the public comment about this trial has been informed by soundbites, prejudice and sympathy.

Counsel suggested the jury’s attitude towards the men in the dock might be different if they were facing charges of mortgage fraud and not rape.”

“You instantly feel a revulsion because of the allegation. Ladies and gentlemen that is a reaction you must guard against. This is a court of law, it is not a court of morals and certainly not a court of public opinion.”

He said Mr Harrison was never told he was going to be interviewed in October 2016 under caution and therefore arrived at the station without a solicitor.

During that interview police refused to give Mr Harrison his original witness statement taken in the days after the alleged rape.

This was designed “to make it as difficult as possible for Rory Harrison to deal with those allegations,” counsel said.

Every single witness who gave evidence about Mr Harrison’s character said the same thing, that he was “caring, kind, honest and modest”, counsel said.

He is not, counsel submitted, “a weasel” who used “weasel words” when trying to comfort the complainant after the alleged rape.

He highlighted the evidence of one woman who said Mr Harrison helped her with her suitcase one day while she was trying to get a bus.

“You might ask: ‘So what? What does it matter?’ It mattered a great deal to [the woman with the suitcase]. And it should matter to you. Because it gives a great insight into Mr Harrison’s character.

Counsel said these characteristics extended to how he treated the complainant after the alleged rape.

“He was genuinely trying to be kind. [The complainant] wasn’t being managed by Rory Harrison.”

Mr Duffy said people of good character are less likely to commit offences and more likely to be telling the truth.

Mr Harrison (25), from Manse Road, Belfast, pleaded not guilty to perverting the course of justice and withholding information relating to the incident.

Mr Duffy addressed the prosecution case that Mr Harrison lied and left out relevant information about the night during his initial police interview. He said none of the officers present at the time noted any issues they had with Mr Harrison’s answers.

He asked what Mr Harrison is alleged to have lied about. The prosecution say he lied when he said the woman was “staring” at Mr Jackson before he went upstairs, counsel said.

Mr Duffy said the prosecution themselves say Mr Harrison might be right about that.

Mr Duffy said the prosecution has changed its position since the beginning of the trial. At the beginning it alleges Mr Harrison witnessed a sex act or the aftermath of a sex act but now it has resiled from this.

“Why have they done that? What confidence does that give you?” he asked.

He said the prosecution changed position because the complainant’s evidence did not support it. She said Mr Harrison couldn’t have seen the alleged rape. Counsel said there is also no evidence he saw the aftermath of a rape. “It was speculative mudslinging they hoped would stick.”

Counsel also addressed the jury on texts exchanged by Mr Harrison and the accused talking about sexual activity with the woman. Mr Harrison said in one text that he saw “more flutes than the twelfth of July” that night.

Mr Duffy addressed the evidence that Mr Harrison made a phone-call to his co-accused Blane McIlroy while dropping the complainant home.

“This phone call doesn’t demonstrate a cover-up, it demonstrates the exact opposite,” counsel said. “He chose to make the phone call while sitting beside [the complainant].”

Mr Duffy said if there was a cover-up in motion there would “surely” be “WhatsApps and phone calls pinging” between the accused directly after the woman was dropped home. There were not, counsel submitted.

Counsel said if the jury are satisfied there is no rape they must acquit his client of covering it up. He submitted the evidence of Mr Florence alone demonstrates there was no rape.

He asked what information Mr Harrison had about the allegations that he kept to himself. The police knew exactly who was involved and where the alleged rape occurred, counsel said.

Mr Duffy also addressed Mr Harrison’s failure to tell police about a text he received from the woman stating “what happened was not consensual.”

He asked why his client would feel the need to disclose this message to police when they already knew the woman was alleging rape when they interviewed him.

If Mr Harrison knew Mr Jackson had committed rape, where is the evidence they knew this? counsel asked, adding that it’s not in the texts seen by the jury.

“Would Paddy Jackson be posting photos of the night before if he’d just committed a rape?”

The prosecution suggest the men organised the cover-up in the Soul Food Cafe on the Ormeau Road in the following hours. Mr Duffy asked why would they chose a small, busy cafe to discuss covering up a rape.

“Why would they go out on the razzle for the next two days if they were being accused of rape and trying to organise themselves?” he added.

Mr Harrison is also accused of deleting texts from his phone about the alleged rape. Mr Harrison has said his phone broke down and the texts were lost when he tried to have it fixed.

Mr Duffy said this account is supported by texts sent by Mr Harrison stating his phone was broken in August 2016.

He asked, if the accused was going to delete these messages, would he not have done it before he went down to the police station in June 2016.

The trial has now finished for the day. Tomorrow the jurors will be addressed on the law by Judge Patricia Smyth. They are expected to begin deliberations early next week.

Judge Smyth said her address on the law will be complex and is being split up into sections, with the first section being done tomorrow. She reminded jurors not to read about the case or go on social media.

Mr Harrison (25), from Manse Road, Belfast, pleaded not guilty to perverting the course of justice and withholding information relating to the incident.

Mr Olding (25), of Ardenlee Street, Belfast, denies one count of rape at a party in Mr Jackson’s house. Both men contend the activity was consensual. Mr Jackson (26), of Oakleigh Park, Belfast, has pleaded not guilty to rape and sexual assault in the early hours of June 28th, 2016 on the same occasion. Blane McIlroy (26), of Royal Lodge Road, Ballydollaghan, Belfast, has pleaded not guilty to one count of exposure.