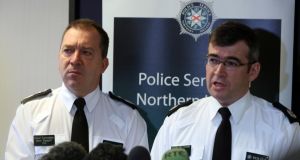 A man has been arrested by detectives investigating a gun attack on police vehicles in north Belfast.

Officers driving in the Brompton Park area of Ardoyne were targeted by a hail of gunfire from a military grade weapon on Thursday night. No one was injured.

The 34-year-old suspect was arrested in the north of the city this morning and has been taken to the PSNI’s serious crime suite in Antrim for questioning.

A Kalashnikov firearm was used in the attack on the police vehicles, which were towing digital signs through the residential area.

Two vehicles and one digital sign were hit by 10 bullets as they passed by what is a flashpoint inner-city area, which has seen serious violence in recent times linked to dissident activity and contentious loyal order marches. Police have recovered one weapon.

The incident was the first of two shootings upon police in Belfast in the space of 24 hours.

A PSNI Land Rover was hit by two bullets as it drove along Suffolk Road in west Belfast on Friday night. Again no one was injured in the incident.

Dissident republicans opposed to the peace process are suspected of carrying out both attacks.