Anglo Irish Bank trial: the numbers, the charges, the witnesses 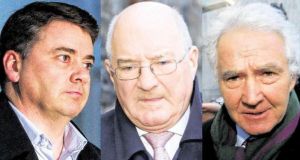 43 days of hearings before jury retired

Seán FitzPatrick (65) of Greystones, Co Wicklow; William McAteer (63) of Rathgar, Dublin; and Pat Whelan (51) of Malahide, Dublin, were charged with 10 counts of providing unlawful financial assistance to 10 individuals, the Maple 10, in July 2008 to buy shares in the bank, contrary to section 60 of the Companies Act.


Mr McAteer and Mr Whelan were also charged with six counts of providing unlawful financial assistance to six members of the Quinn family.


The charges related to loans given by Anglo Irish Bank to the 16 individuals totalling €619 million to buy shares in the bank in July 2008. The loans were part of a deal to unwind businessman Se án Quinn’s contracts for difference – investment products based on share value – in Anglo.


The jury
The jury in the trial of former Anglo Irish Bank directors Se án FitzPatrick, William McAteer and Pat Whelan was the first in the history of the State to have 15 members.

Legislation was passed by the Oireachtas to allow larger juries to be chosen in lengthy cases.

This was to prevent the risk of a trial collapsing should jurors become ill or otherwise be unable to serve.


At the beginning of the trial, Judge Martin Nolan told the panel of potential jurors that what happened in Anglo Irish Bank had become “a matter of public controversy”. He warned them they should not serve if they had strong views on the subject or if they had expressed their views on Facebook or other websites.

He also warned them the trial would be a long one and listed more than 100 witnesses who could be giving evidence. He said if potential jurors knew any of them, they should not serve. Some 15 jurors were selected over two days.

Weeks into the trial, one of the 15 jurors was excused after he told the judge he was a friend of someone whose name had come up in the course of evidence. This brought the numbers down to 14.

Last Friday, after closing arguments and the judge’s direction to the jury, the court registrar carried out a public ballot to choose the 12 jurors who would go on to consider the verdict. The courtroom was silent as he drew the names of the jurors from a drum and read them out. The two remaining jurors who were not drawn were told they were free to go.

There was little reaction on the faces of the jurors selected to remain, though one woman winced, and the two who were sent home, a man and a woman, looked disappointed.

Judge Martin Nolan said he wanted to particularly thank the two for their service and he was sorry to see them go.

“It is terrible that you are being discharged at this stage,” he said.

He said he would exempt them from jury service for 10 years.