Almost 3,500 gardaí in cases where youth crimes were not followed up 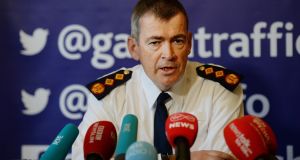 Almost 3,500 officers have been linked to cases in which the crimes of youth offenders were not followed up by the Garda.

Garda Commissioner Drew Harris said each failure to appropriately progress a youth offender case had been sent to local superintendents to examine if disciplinary action was necessary.

While some disciplinary cases could “drag on for many months” he was hopeful a significant amount of progress could be achieved in the next “three to six months”.

He also cautioned that in some cases where youth criminals were not pursued, their co-accused for the same crimes were pursued and faced justice; underlining the need for all cases to be examined properly from a possible disciplinary perspective.

However, he also said there was no evidence to suggest the problems found within the youth justice system had occurred in the adult criminal justice system, or certainly not on the same scale.

Commissioner Harris told the joint Oireachtas Committee on Justice on Wednesday that some 3,414 Garda members had been linked to the youth crime cases not progressed appropriately since 2010.

Of those, some 184 members are no longer serving. That means 3,230 current serving Garda members, or about one in four members across the whole force, are linked to the controversy.

In theory disciplinary action will now be considered against all of them by their superintendents.

However, how vigorously they will be pursued or indeed how many, if any, will be adjudged to have engaged in deliberate wrongdoing has yet to be determined.

It emerged last month that 7,894 youth crimes had essentially not been pursued by the Garda. The crimes were committed by a total of 3,489 children.

In each case the child was the suspect for a crime; from minor issues to serious offences including one rape case, seven violent disorder cases and three threats to kill. There were 55 “serious offences” involved.

All of the children whose cases were not progressed were referred to the Youth Diversion Programme, where offenders admit their guilt and efforts are made to keep them out of the criminal justice system proper.

However, a large volume of children are not accepted in the diversion programme, sometimes because they do not admit their guilt.

In such cases they should be taken back into the criminal justice system proper and dealt with under that system; including criminal charges, court appearances and convictions.

However, almost half of the children who were not granted access to the Youth Diversion Programme were never taken back into the criminal justice system when they should have been.

Their cases effectively slipped through the cracks and were never pursued in any way.

An internal review has concluded that 7,894 crimes committed by 3,489 children – 55 serious offenders among them – saw their cases fall through the system and they never faced justice.

Commissioner Harris has now said some 3,414 Garda members were dealing with these cases when they effectively ground to a halt with no action taken against the youth offenders.

And he has now asked the superintendents who manage the 3,230 gardaí still serving across the country to review whether disciplinary action should be taken against those members.

An internal Garda review, the results of which were published four weeks ago, examined all 158,521 referrals, involving 57,386 children, into the diversion programme between 2010 and 2017.

Some 103,515 referrals were deemed suitable for the programme and 55,506 were deemed not suitable. These unsuitable cases should have been progressed through the wider justice system, mainly via prosecutions.

But in 7,894 cases nothing further happened despite there being grounds, and enough evidence, to pursue the cases.

The crimes the children committed included one rape and one other sexual assault as well as drugs and firearms offences. A total of 55 crimes not pursued were deemed serious but most were less serious – criminal damage, theft, public orders and others.