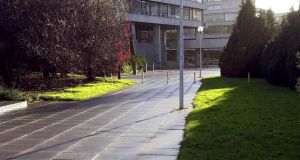 The alleged rape on Belfield campus occurred in the early hours of Friday morning after the victim had been socialising on Thursday night into Friday morning. File Photograph: Eric Luke

Gardai are investigating an alleged rape on the Belfield campus at University College Dublin.

The Irish Times understands a student at the Dublin 4 university has told gardai she was attacked late last week.

The alleged rape occurred in the early hours of Friday morning after the victim had been socialising on Thursday night into Friday morning.

A full Garda investigation is underway and the victim has given a statement to the Garda. A Garda spokeswoman said an alleged sexual assault was being investigated.

The incident has not emerged in the public domain until now.

When contacted on Tuesday afternoon for comment a spokesman for UCD said the college was aware “there is a report made to the gardaí”.

He said he could not comment further at this time and could not disclose the nature of the allegations in the report made to the Garda.

A notice on the UCD Students’ Union social media accounts yesterday reminded students that a “walk safe” service was available, though made no mention of the alleged attack last week.

The “walk safe” service on the Belfield campus allows students to contact UCD security staff by phone and request an escort from one location on campus to another.

Efforts to contact the Students’ Union for comment on the alleged attack had not been successful at the time of writing.

The alleged rape at UCD, which has already been the cause of much concern on campus, came less than a week after the attack on Kym Owens (18) in Maynooth University.

She suffered serious head injuries after being violently beaten during her walk from a bus stop to her student digs in the Co Kildare town.

Ms Owens had travelled by bus from Monaghan to Maynooth last Sunday week and had just disembarked the bus when she was attacked on the street at about 8.30pm.

However there is no suggestion of any link between the cases.

A UCD student said there had been considerable discussion on campus about the alleged rape last week. She believe the dearth of information or lack of any reporting had added to the fear among many female students.